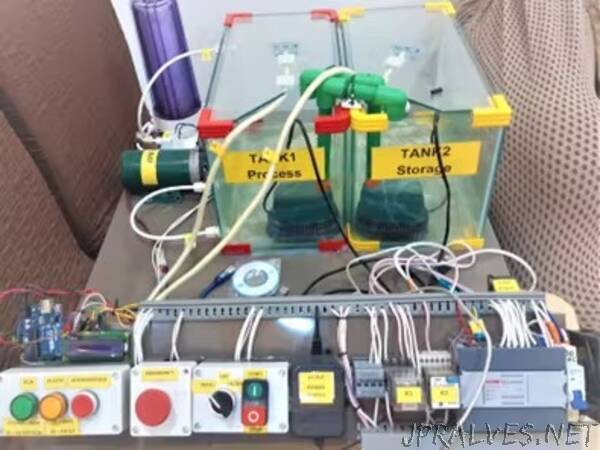 ABSTRACT
PLC technology “Programming ControlSystem” is quite an interesting and crucial type of modern automation innowadays factories and industries. Due to emerge of this technology in severaldecades ago but it’s still one of the most used and practical kind of controlsystem all around the world.

Nowadays, almost all of the simple and complicated industries have thesetypes of automation the two main part of any factory is the control systemwhich here implemented by using PLC and the supervisory or operational partwhich here designed by a computer-based SCADA system.

We can apply this project to anywater treatment plant it’s a prototype based on its kind of sensors but in caseof using the industrial ones we can control the high scale water filtration ortreatment plants.

This project designed of threelevels the first one is the control level where the sensors collect all thephysical data like level and temperature and combine them together and sendthem via industrial protocol to the PLC and the second level is the controllevel where the data processed and execute by using the logic inside the PLCall the logics written according to the IEC 61131-3 and the supervisory levelhad done by suing industrial protocol and a SCADA system to show the data tothe operator in the remote control station.

The project is a mimic of the bigactual industrial projects we can use this design to configure and operate oreven maintenance and troubleshoot the large-scale project. The students whowant to work on this project will collect enough knowledge to be a goodengineer in his real engineering life.

Introduction
A programmable logic controller(PLC) or programmable controller is an industrial computer that has beenruggedized and adapted for the control of manufacturing processes, such asassembly lines, machines, robotic devices, or any activity that requires highreliability, ease of programming, and process fault diagnosis. Dick Morley isconsidered as the father of PLC as he had invented the first PLC, the Modicon084, for General Motors in 1968.

PLCs can range from small modulardevices with tens of inputs and outputs (I/O), in a housing integral with theprocessor, to large rack-mounted modular devices with thousands of I/O, andwhich are often networked to other PLC and SCADA systems.

Problem Statement
Today’s highly increasing competitivenessover the industry demands high quality and most consistent products with acompetitive price. To address this challenge number of industries consideringvarious new product designs and integrated manufacturing techniques in parallelwith the use of automated devices.

One of the remarkable andinfluential moves for getting the solutions of above-mentioned challenge is theindustrial automation. Industrial automation facilitates toincrease the product quality, reliability and production rate while reducingproduction and design cost by adopting new, innovative and integratedtechnologies and services.

On the other hand, automation replaces the humaninvolvement with the use of logical programming commands and powerfulmachineries

Industrial Automation isthe replacement with computers and machines to that of human thinking. Theword Automation gives the meaning ‘self-dictating’ or‘a mechanism moves by itself’ that derived from the Greek words Auto and Matos where auto means self while Matos means moving.

In a brief, industrial automation can be defined asthe use of set technologies and automatic control devicesthat results the automatic operation and control of industrial processes withoutsignificant human intervention and achieving superior performance than manualcontrol. These automation devices include PLCs, PCs, PACs, etc.and technologies include various industrial communication systems.

Objective
Centralized water treatment plantsare based on coagulation, flocculation anddisinfection processes and found to be most cost-effective in treating largequantities of water. However, they entail large infrastructure costs which isdifficult to raise in rural regions of developing countries and are generallyinstalled using government funding. Hence, centralized treatment is availableonly in the metros of developing countries and mainly benefit the urbanpopulation. The transportation cost of water to the centralized treatment plantand from the treatment plant to the individual households is another majorexpense which limits its benefits to regions which are situated away from the treatmentplant.

Significance of Project
WaterTreatment Plants which treats water sourced from differentwater bodies and purifies it making it suitable for consumption as well asother day-to-day activities. The water treatment plants remove the chemicals, particulates, organic materials as well as other debris from the water andtreat the water resulting in clean and potable water that can be used forcooking, cleaning, etc. The water treatment plant engaged for purifying waterand making it suitable for human consumption ensures to prevent any short-termor long-term health risks for adverse impacts of the polluted water.

Project Scope
The main goal of this project is todevelop a student attendance using PLC and SCADA systems. There are four scopesthat will be cover in this project. First of all is to design and implement thephilosophy of the water treatment plant specially doing the wiring and fix themalfunctioning of the design, second thing is to getting used to the PLC logiclike Ladder programming, the third scop is to understand how to use industrialprotocols like Modbus, finally design and implement a SCADA system that combineall of these aspects in one screen.”