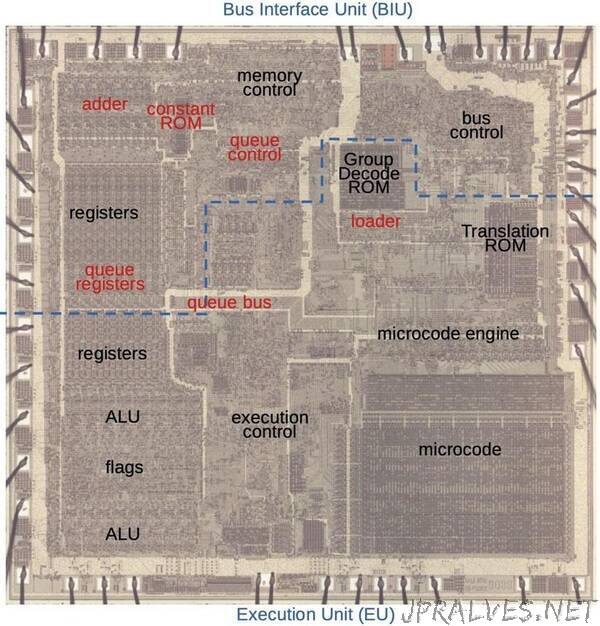 “The groundbreaking 8086 microprocessor was introduced by Intel in 1978 and led to the x86 architecture that still dominates desktop and server computing. One way that the 8086 increased performance was by prefetching: the processor fetches instructions from memory before they are needed, so the processor can execute them without waiting on the (relatively slow) memory. I’ve been reverse-engineering the 8086 from die photos and this blog post discusses what I’ve uncovered about the prefetch circuitry.

The die photo below shows the 8086 microprocessor under a microscope. The metal layer on top of the chip is visible, with the silicon and polysilicon mostly hidden underneath. Around the edges of the die, bond wires connect pads to the chip’s 40 external pins. I’ve labeled the key functional blocks; ones that are important to the prefetch queue are highlighted in red and will be discussed in detail below. Architecturally, the chip is partitioned into a Bus Interface Unit (BIU) at the top and an Execution Unit (EU) below. The BIU handles memory accesses, while the Execution Unit (EU) executes instructions.

Prefetching and the architecture of the 8086
Prefetching had a major impact on the design of the 8086. Earlier processors such as the 6502, 8080, or Z80 were deterministic. The processor fetched an instruction, executed the instruction, fetched the next instruction, and so forth. Memory accesses corresponded directly to instruction fetching and execution and instructions took a predictable number of clock cycles. This all changed with the introduction of the prefetch queue. Memory operations became unlinked from instruction execution since prefetches happen as needed and when the memory bus is available.