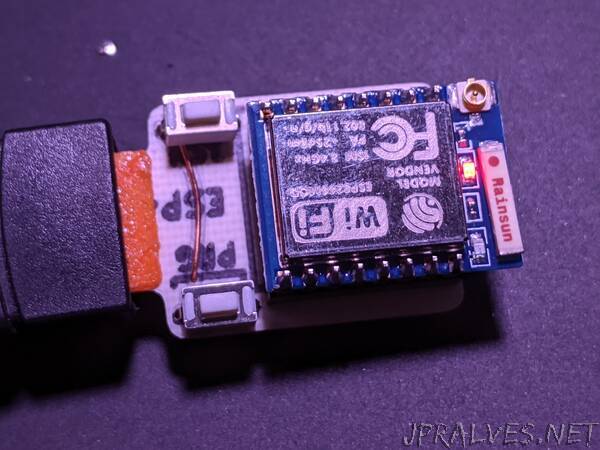 This is a Kicad design which uses a PCB USB connector and integrates an ESP-12 (or 07), CH330N USB controller, a small voltage regulator (HT7233), and a AHT-10 temperature/humidity sensor. Flash and reset buttons are also included.

This PCB is designed for reflow soldering of the SMD components. I’m sure someone can hand solder it, but it wouldn’t be me.

R3 should be left out if the ESP modules being used have an internal pullup between RST and 3V3 (which most newer ones seem to have). Otherwise, you end up with a combined pullup resistance near 5k, and GPIO16 though a 1k resistor seems to struggle to pulse that long enough to perform a proper wake. I really need a scope to dig into this further.

I prefer to mount my ESP modules on 2mm pin headers. It’s not really necessary unless you screw up designs as often as I do. However, doing so technically makes all the USB stuff optional for some boards since I can just remove the module for programming.

Design Notes
The CH330N is running off the 5V rail, which technically means it’s driving the ESP UART at (allowing for a 0.3v drop from D1) approx 4.2V, which is clearly above the 3.6V rated max for the ESP. In practice, the ESP-8266 is quite 5V tolerant on GPIO’s, and the CH330N only drives at something like 4mA, so this probably isn’t worth worrying about.

Bill of Materials
Most parts are purchased from LCSC. Some of these choices aren’t ideal, but I had them on hand and they work. The only things I plan on doing differently is replacing the fuse with a 300mA and changing the HT-7233 out for a SOT-23-3 version. A design based around one of the more common DFN-6 sensors like the Si70xx series might happen down the road.