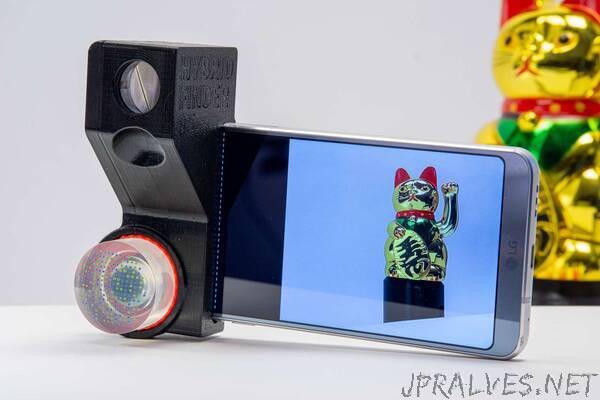 “If you have ever used an even moderately fancy analog or digital camera (or a telescope, or a gun sight, …) you are probably familiar with viewfinders. There are different levels of sophistication in relation to the function and engineering complexity of viewfinders, starting with sports viewfinders, more elaborate constructions offering a demagnification (a wider field of view than the human eye), adding indicator lines for framing and even offering overlays for proper focussing (rangefinders). Once you put a digital sensor in a camera, a lot of viewfinders get pretty boring really fast. Why use a viewfinder if you’ve got a display with a live sensor readout? Well, there are still a few advantages (other than pure nostalgia), so viewfinders made their comeback as EVFs or Electronic Viewfinders (a tiny display with some optics to give you the impression of a really large display in front of your eye).

And that’s kind of a good tradeoff. Especially if you’ve got an interchangeable lens camera your EVF is the only sensible option. But Fujifilm did something weird a few years ago. They released the X100, a camera with a fixed lens and something they called a “hybrid viewfinder”. Basically a combination of an optical viewfinder with a digital overlay. Fancy? Fancy! Can we build something similar? Like built our own viewfinder and make it a hybrid one? Sure. Let’s start with the basics:

But before we do that, let me put a tiny disclaimer here: I am not an optics person. I spent most of my rather low-quality physics classes daydreaming and I have very little clue what I am talking about here, take everything with a rather large grain of salt. I’ll add links whenever possible and encourage further reading.

How does a viewfinder work?
That was a rather complicated question and sometimes there is an abundance of information available on the internet regarding a specific topic. Sometimes there is almost none. Luckily, Rick Oleson did an exhaustive compilation on the history of viewfinders and rangefinders which actually includes ray diagrams explaining how light travels through the optical system of the viewfinder. This was an extremely helpful resource and is one of these excellent examples where a single person is almost the singular authority when it comes to collecting all necessary info regarding a certain topic on their personal internet page (other examples include Redblobgame’s Hexagons or Paul Bourke’s Fisheyes). Anyway, back to the topic: viewfinders. The simplest and best-performing viewfinder concept that is listed in Oleson’s overview (and is still in use today) is the “Reverse Galilean Telescope”. Basically two lenses, one is negative, letting incoming rays diverge (thus demagnifying) and a second positive lens which collimates the rays, making them enter the pupil of the eye in parallel.

A short excursion on optics: when designing a lens for a camera incoming light needs to be focussed onto a plane, forming an image. This plane can be occupied by film, a sensor, or anything else that can make sense of a focused image. When talking about optics that are for human operation (read: should put light directly into the human eye) exiting light needs to be shaped in a way that the lens of the eye can focus it onto the retina. Thus, most of the stuff that is put in front of our eye, e.g. scope things (riflescope, telescope, …), tries to make light exit in (almost) parallel rays (collimated) at a maximum width of a few millimeters (the size of our pupil) so it can be focussed by a relaxed lens in our eye onto the retina. If the rays are not parallel, we need to compress the lens in our eye (focus close instead of on an infinitely far away object light the horizon).

So, back to the reverse galilean: A Galilean telescope takes light from an infinitely far away object, e.g. the moon or a star (so light that basically hits in parallel rays) and expands the beam (magnifies it) and lets it exit in parallel again, ready for processing by the human vision apparatus. The nice thing about a Galilean in comparison to a Keplerian telescope is that the light is not going through a focal point within the tube of the telescope before it is collimated again which would result in a flipped image. Not a big issue when the light would hit a sensor, but kinda annoying for our brain. So, we know how a Galilean telescope works, and if we want to have a broader field of view instead of a narrower one, we just need to flip the optics, thus a reversed galilean viewfinder. Cool!

But, there is an issue with reverse galilean designs: sometimes it would be really cool to add something to the image in the viewfinder. This could be framelines for cameras or crosshairs in a riflescope. Because the focal point of the negative lens lies in front of the viewfinder, the only place in the optical system where you could place something that would be in focus is a few centimeters in front of the viewfinder. Not very practical. There are two ways how we can deal with that. One option is to magically extend the optical path to add framelines placed at the appropriate distance without obstructing the front view of the viewfinder (that’s what a lot of rangefinder designs did and what we will do) or the Albada-style viewfinder: A dutchman named van Albada came up with the idea of using a semi-translucent mirror coating on the interior surface of the negative lens to reflect a hidden image from inside the viewfinder into the optical path, neatly hiding the necessary image of framelines within the viewfinder housing.

That’s the design of nearly all fancy and expensive modern viewfinders you can buy to slide them in the hotshoe of your camera (example: Ricoh Viewfinder).

How can we build a viewfinder?
So, which lenses do we need to build a reverse galilean viewfinder and where do we get them? Basically whenever choosing lenses we got two options: lenses with one uncurved surface and one curved surface (called a plano-concave/convex) or lenses that have curvatures on both sides (bi-concave/convex).

The simplified equations for a galilean viewfinder are nicely summarized in a blog post by Panomicron. In general, when doing optical design people start with thin lenses (assuming that each lens is an infinitely thin idealized surface) and paraxial equations (assuming that the refraction of light obeys a very simple formula close to the optical axis). Usually, that’s good for the rough design. Since we don’t want to go down the rabbit hole on how to make our own custom lenses, we stick to off-the-shelf parts we can buy from a lens manufacturer. It may even be clever to go with plastic lenses (made from PMMA, also known as Plexiglas/acrylic glass) since they perform slightly worse but are way cheaper, but I couldn’t find a vendor for those that has a wide range of optics to choose from. When sticking to glass lenses, there is basically just Edmund Optics with a sufficient catalog. By picking something from the catalog, design options are a lot easier as well, because once we decided on the two required lenses, we just need to find the right distance between them (less options, less variables to optimize for).

Using the paraxial thin-lens approximation, the distance would be -30+60=30mm, that’s important for the next step. The ratio of focal lengths results in a magnification ratio of 0.5, that should be sufficient for lenses not wider than 25mm. The anti-reflection coating in this case is some plain Magnesium Fluoride (MgF2) coating, which apparently is good enough for visible wavelengths. Since I don’t want to shoot some high-powered laser beams through these lenses I assume that’s more than sufficient.

But how do we get the precise distance between both elements? We can compute that using the back and front focal distances from the datasheets that Edmund is publishing for their lenses. Or we can just crunch the numbers with software. I did this in this case with Zemax OpticStudio, adding the lenses from the built-in lens catalog. Usually when designing things the convention dictates that light travels from left to right through the optical system but for eyepieces it is apparently not uncommon to change that. Defining a light source with parallel rays about the size of the human eye’s pupil and shooting the light into the viewfinder (that’s what I did here). So imagine the eye is placed on the left side looking at a far-away object to the right.

When letting OpticStudio optimize the distance between both lenses with the goal of creating output rays as parallel as possible, we get a distance of 27.964mm. Then we just need to print an enclosure and everything just works (usually not, but in this case it did).

Make it hybrid!
Next step: add an overlay. So, how can we add an overlay? Apparently, when doing a course on optics, there is some chapter about the swiss knife of optical engineering, the magical tool that is also known as a prism. Prisms can be used and abused for numerous purposes from micro-adjusting angles and distances, to flipping images along different axes, refracting light, and … in our case: beamsplitting. The idea is to use a prism at a 45-degree angle and coat the surface with just a very thin layer of reflective metal. By just adding enough metal to get the surface to 50 percent reflection we can create a beam splitter. Half of the light travels unobstructed through the prism (almost like a window) half of the light gets reflected at a 90-degree angle. If that sounds familiar: that’s exactly how teleprompters work or the famous Pepper’s Ghost illusion. When we look at Fujifilm’s long gone product page in the wayback machine we spot exactly that for the X100’s hybrid viewfinder!”