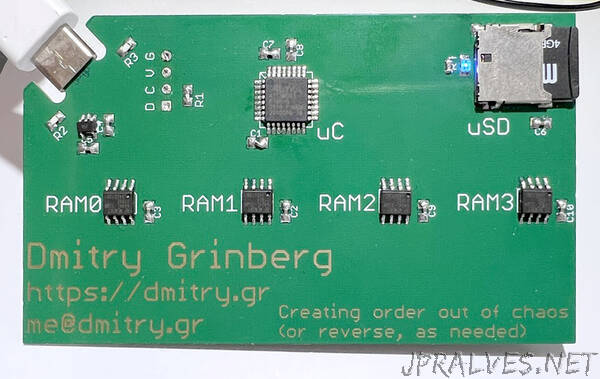 “Why?
A long long time ago (in 2012) I ran Linux on an 8-bit AVR. It was kind of a cool record at the time. I do not think anyone has beaten it - nobody’s managed to run Linux on a lower-end device than that 8-bit AVR. The main problem was that is was too slow to be practical. The effective speed was 10KHz, the boot time was 6 hours. Cool, but I doubt that any one of those people who built one of those devices based on my design ever waited for the device to boot more than once. It was time to improve it!

So what could I improve? A number of things. First, I wanted the new design to be speedy enough to boot in a few minutes and reply to commands in seconds. This would make using the device practical and not a test of patience. Second, I wanted it to be easy to assemble for anyone. This meant no components with tight spacing, no components with too many pins, and no components with contacts hidden underneath them. A part of this wish was also that someone could actually assemble one, meaning that I had to select components that are actually buyable in the middle of the current ongoing shortage of, well, everything. Additionally, I wanted the device to be easy to interface with. The original project required a USB-to-serial adapter. This would not do. And, finally, I wanted the whole thing to be cheap and compact enough to serve as my business card.”