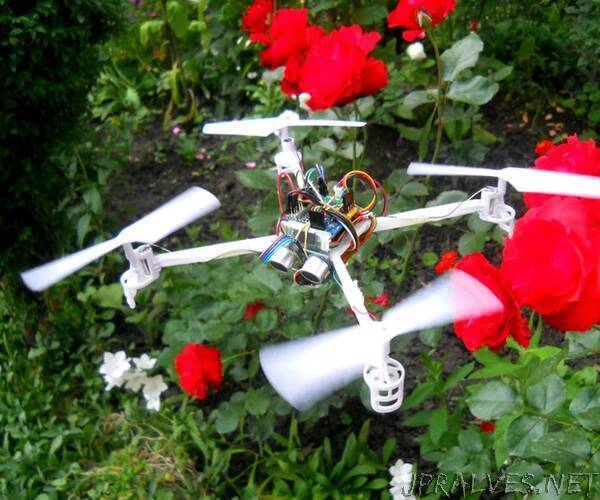 “Drones are very popular toys and tools these days. You can find professional and even beginner drones and flying gadgets in the market. I have four drones (quadcopters and hexcopters), because I love everything that flies, but the 200th flight isn’t so interesting and starts to be boring, so I decided that I will build my own drone with some extra feutures. I like to program Arduino and design circuits and gadgets so I started to build it. I used the MultiWii flight controller that is based on the ATMega328 chip that is also used in the Arduino UNO, so programming was pretty simple. This drone can be connected to an Android smartphone that sends its GPS data to the drone, that compares to its own GPS signal, then starts to follow phone, so if I move on the street the drone follows me. Of course has many failings yet, because I wasn’t able to make a proffesional filming drone, but follows the phone, makes a video and also has a ultrasonic distance sensor to avoid the obstacles in the air. I think this is pretty much features from a homemade drone. As soon as possible I will load up a video about a flight, but it is hard to make good quality records with an always moving drone.

The drone is almost fully automatically, you don’t have to control it, because follows your phone that is usually in your bike, The ultrasonic sensor helps to bypass trees, buildings and other obstacles and the GPS gives a very accurate position data, but let’s see what do we have in total:

- 1000mAh battery, enough for 16-18 minutes of continous flying
- ultrasonic sensor to avoid obstacles in the air
- Bluetooth module to recieve data from the phone
- Arduino based microcontroller
- build-in gyroscope
- regulated maximum height (5 meters)
- when battery is low automatically lands on the phone (hopefully in your hands)
- costs about $100 to build
- can be programmed to anything
- with the help of the GPS you can send the drone to any coordinates
- quadcopter desing
- equipped with a 2MP 720p HQ videocamera
- weighs 109 grams (3.84 ounces)
So that is all that the first version can do, of course I want to develop it. During the summer I want to hack my bigger drone with this software.”