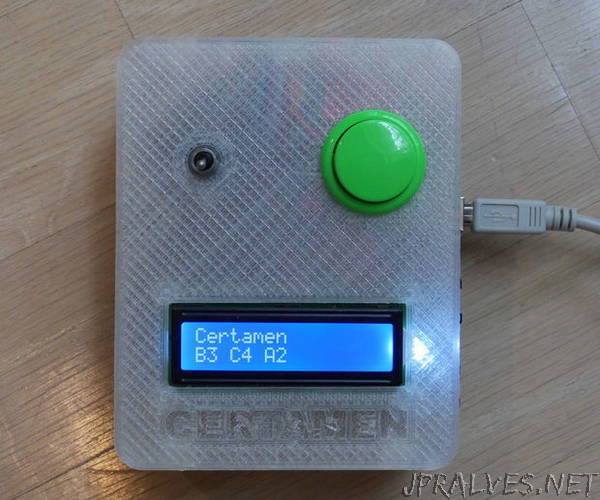 “The Certamen quiz team competition from the Junior Classical League involves quiz questions on Greek/Roman subjects. Individual contestants press buzzer buttons when they have an answer. The machine keeps track of the order in which buttons were pressed, subject to the team-lockout rule that once a player on a team presses a button, the other presses from that team don’t count. The machine we built was for three teams of four players each. Additionally, so that other school groups could use the machine as a standard quiz machine, there is an option to disregard teams and just keep track of button order.
The school Certamen team needed a machine to practice on, but the official machine is $545 for the standalone system (a variant that plugs into a computer is $435), which was budgetarily infeasible. Plus obviously overpriced!
And so I designed a much cheaper one, based on an Arduino Mega. It’s not approved for official tournaments, but it’s good for practice.
One of the design issues that I kept in mind was that we needed moderately long cables, and had to have signal filtering to avoid false positives due to electrical noise from nearby devices. I ended up using CAT-6 cable, with each button’s signals going over one twisted pair. We tested electrical noise with an oscilloscope and an AC-powered electric pencil sharpener running on top of a messy pile of cables and found that 100nF capacitor should be sufficient for filtering.”