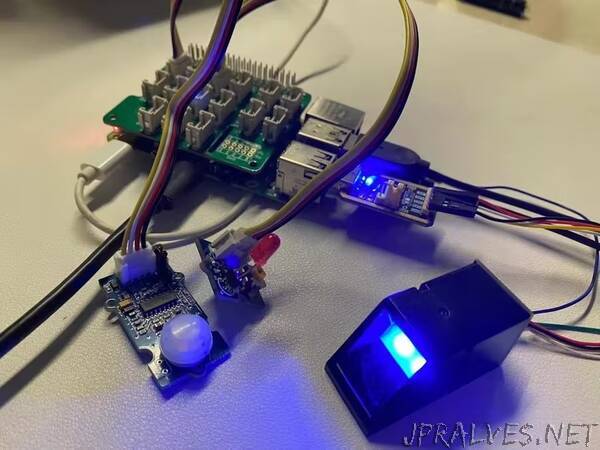 “Build a Raspberry Pi-powered system to identify attendance and use pandas to collect data that can help attendace management.

Recognizing fingerprints on Raspberry Pi can be made easy with a few sensors by simply wiring. Raspberry Pi also helps the retailer this way to collect punch-in/punch-out process as a check-in machine.

PIR refers to a passive infrared sensor that measures infrared light radiating from objects in its field of view. PIR motion sensors are most often used in PIR-based motion detectors such as security alarms and automatic lighting applications.

PIR Sensor is short for passive infrared sensor, which applies to projects that need to detect human or particle movement in a certain range. It is also known as PIR (motion) sensor or IR sensor.

Technically, PIR is made of a pyroelectric sensor, which is able to detect different levels of infrared radiation.

If the PIR sensor notices the infrared energy, the motion detector is triggered and the sensor outputs HIGH on its SIG pin. The detecting range and response speed can be adjusted by 2 potentiometers soldered on its circuit board, The response speed is from 0.3s - 25s, and max 6 meters of detecting range.

Interface the sensor and store the data
Adafruit has written both Arduino library and Python library to help you run the fingerprint detection program in 10 minutes. The library supports both enrollments and searches for fingerprints. Once you enroll fingerprints, there will be an assigning ID # correspond to each print for you to search later. You will actually look for the exact ID that has been photographed and verify if the ID is enrolled.

pandas is a software library written for the Python programming language for data manipulation and analysis. In particular, it offers data structures and operations for manipulating numerical tables and time series. It is free software released under the three-clause BSD license. (Wikipedia)

The implementation of the project will consist of the following steps:

There are different models of AS608 sensor that are available on the market and it is important to wire the sensor properly.”