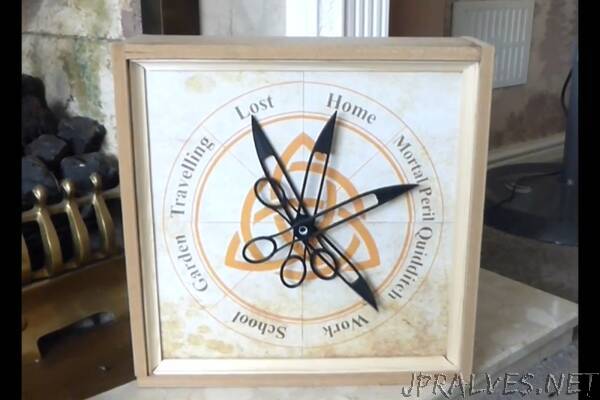 “This project contains all the work I have done so far on creating a working GPS driven clock that emulates the Magical Clock from the Harry Potter films.

I spent months on this and you are free to download the project, its on an MIT open source licence.
If you have trouble drop an incident. If you feel you could contribute to the project, let me know, I have no idea how to organise that, yet, but taking suggestions.

Background
About four years ago, having watched a Harry Potter film. I knew; I could make that. I knew, I could build some arduino program to do this, linked to an MQTT server and some kind of app to get location data.

What I also knew was, I would have problems with CAD, designing a mechanism and God Damn 3D printing. I had no skills or experience in the first two, but had had been working with my 3D printer for a while, and I HATE 3d printing, it’s an absolute pain in the backside.

So it stayed in my head.

Recently this year, I’d like to say in lockdown, but I’ve been working the whole time; I came across other people who had also thought, I can make that, and they did. Having seen others do this, it gave me a kick to finally get started.

It’s from seeing how others designed and made their projects that made me think, “that’s not how I was going to do it, I like it, there are some brilliant ideas there, but definately not how I would do it”.

One such project, that gave me the biggest kick, because it was done by one chap, not a university team or sqaud of engineers. Just some guy, like me, I believe. This project above all others was the one that drove me to do it my way, except for, I totally stole his lad’s design for clock hands (scissors) and used it as a base for mine (they are different mechanism) it was just right and didnt need changing.

This was one of the best sources of inspriation and you could actually build something better than where I currently am, and its so well documented Im giving it special mention here. Other projects that inspired will be in an appendix. So take a look at his project, https://github.com/randomstring/WeasleyClock.

Ethos
So if this other project’s so damn good why do this. Well sheer bloody mindedness and a ethos that has ran thru most of my projects. Cost (and a loathing of Python).

The aim of this project was to produce something that could be built cheaply*.

Requiring a 3D printer can be expensive, and whilst I had one to design and build this with, the aim was if you could beg, borrow steal or visit a HackerSpace (ideally a hackerspace) then you could print the mechanical components and not be reliant on what is can be expensive gears and cogs from a hobbyshop. The cost to print the mechanism, is pennies, I havent worked it out I’ll be honest, but even with electric bill it’s still under a fiver (probably under a quid).

By using arduino and its clones and simple stepper motors, the cost of the electronics should come under £20, if you wait for the month long shipping :-).

By comparison, other projects, I estimated just for components, not mounting boards or wires is approx $450.

You could by a cheap 3d Printer, and still come out with money to spare. Admittedly it doesnt have the precision and I would love to build with precision components with some changes to my electronics, but thats a lot of money for a hobby project, that isnt being spent on tools.”