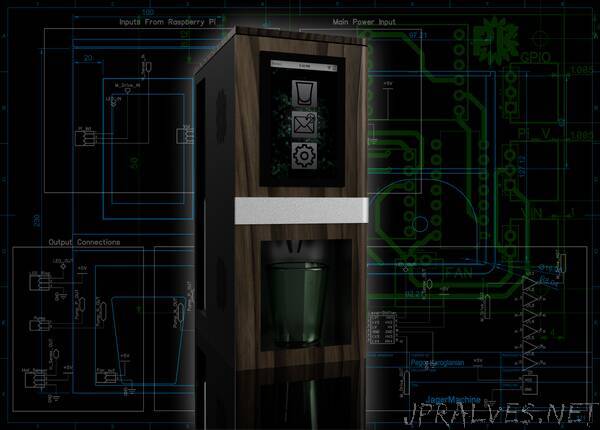 “An IoT shot pouring machine powered by a Raspberry Pi

The JägerMachine is an IoT shot pouring machine powered by a Raspberry Pi 3B+. It features a full GUI that allows the user to configure the device, pour a shot, and also check previous messages sent to the machine. Once paired with it’s own GMail account, the JägerMachine waits for emails containing a secret user defined subject line and a custom message that gets displayed on the screen. Once an email is received a shot is poured :)
Initially this project started as a gift for a friend. We always give each other Jagermeister related gifts as an inside joke, so I figured this would be PERFECT. It started out as a pretty bland render I threw together on Fusion 360 as seen below and slowly started getting more and more complicated.

The hardware for this build wasn’t too complicated. I used a logic level shifter to drive the WS2812B LED Ring since it requires 5V logic and RPi outputs 3.3V logic and an H-Bridge Motor driver module for the pump. The only funky part was that I had to use a Hex-Invert IC since the pins I decided to use on the Raspberry Pi are normally high until they are configured as outputs.
To avoid having a ton of wires everywhere I designed a motherboard PCB that the breakout boards can easily pop onto. The files & schematic for this PCB are in the Hardware folder of this repo. The completed board can be seen below.”