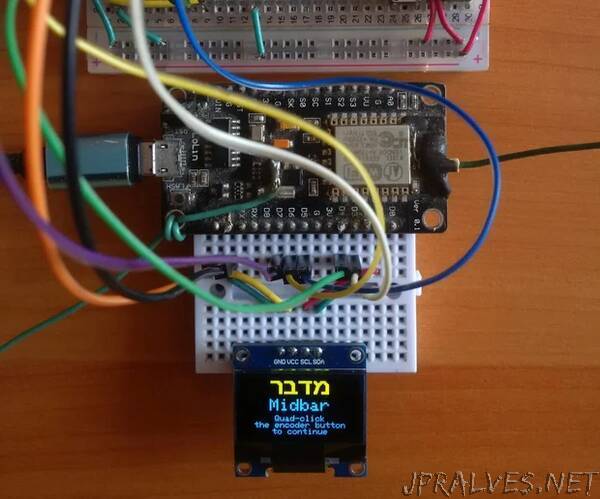 “A while ago, I made the ESP32 version of Midbar which later evolved into a multi-user Cipherbox. While developing the Cipherbox, I realized that even the Lite version of it might be too expensive and too redundant for some people, so I “resurrected” the single-user Midbar project and made an ESP8266 version of it.

The purpose of Midbar is to significantly increase the cost of unauthorized access to its user’s personal data.

ESP8266 version of Midbar utilizes the 3DES + AES + Blowfish + Serpent encryption algorithm alongside the ESP8266’s built-in memory to store eight passwords and four credit cards in the encrypted form. It also utilizes the HMAC SHA-256 to verify the integrity of the stored logins, which means that if at least one bit of an encrypted login gets flipped, Midbar will inform you about it by displaying the following alert: “Integrity Verification Failed!!!”

In case you’ve missed the original Midbar or just want to know why I called it Midbar in the first place - Midbar (מדבר) is a Hebrew word that means “pasture,” “uninhabited land,” “wilderness,” “large tracts of wilderness (around cities),” “desert.” I had two reasons for choosing the word Midbar as the name of this project. First - while working on my previous projects, I noticed that the so-called “device that keeps your personal data secure in an encrypted form” market is pretty much a “desert around the oasis of the password manager market.” Second - I couldn’t find a better word to describe that project. At first, I wanted to call it a “Password Vault,” but then I realized that it’s more than just a password vault. So, I just called it Midbar!