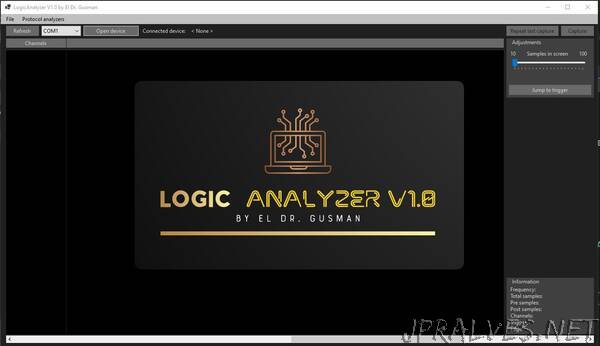 Overview
LogicAnalyzer is a very cheap analyzer based in a Raspberry Pico. The analyzer offers up to 24 digital channels, pre and post trigger sampling, edge trigger and pattern trigger up to 16 bits.

The most basic version is purely a Pico as-is, you only need to short GPIO0 and GPIO1, upload the firmware and you’re good to go. Of course this has some limitations as the Pico only supports 3.3v, if you want to use it to diagnose 5v signals I also have designed a fast level shifter board.

Additionally to the hardware the logic analyzer also includes a powerful software (Windows only for now) where you can visualize the captured data, export captures, use protocol analyzers, etc.

About logic analyzers and triggers
A logic analyzer only cares about logic states of lines, so without thinking much about it you may think that any microcontroller using DMA channels that read GPIO values would be more than enough, but that is the “easy” part of a logic analyzer, the problem comes when you need to trigger the captures based in GPIO states and you want also to have data captured previously and after the trigger happens.

For that, you need to compare the read values from the GPIOs check if the pin or pins values match the requested trigger and you must do it as fast as you want to capture, so for example, the most basic comparison will at least consume 3 or 4 instructions, if each instruction is 1 to 4 cycles (more or less, I’m thinking in ARM processors) then you will use up to 16 cycles to read a sample, so you would need a 1.6Ghz CPU to sample at 100Msps.

So, how the heck the pico is able to achieve this? Well, the key are the PIO units, these units are a wonder, they are coprocessors explicitly designed to handle IO, it uses a very restricted and deterministic assembler (only nine instructions that each take a single cycle to execute) but extremely efficient, so efficient that with only two instructions is possible to create a loop that captures GPIO data up to 30 bits and redirects the program flow based in the status of one of these GPIOs.

Of course there are some limitations, that two-instruction loop can only change the execution flow based on a GPIO pin, it can’t branch based on a pattern (using only two instructions) but as we have more than one unit (each pico has two units and each unit has four state machines, so you can run in parallel up to 8 programs) we can abuse a bit the system and create a separate trigger program that notifies the capture program using a pin, that’s why GPIO0 and GPIO1 are shorted.

The edge trigger uses a single program, that’s the basic version that uses only two instructions, runs up to 100Msps and the triggering is synchronized with the captures.

The complex triggers is the first that uses two programs, one to capture and other for the trigger. The complex trigger supports patterns up to 16 bits matched from consecutive channels in the first 16 ones. Having two programs is key to keep sampling up to 100Msps, the trigger program uses three instructions so its speed is limited to 66Msps, but the sampling can run at full speed using two instructions. Of course this presents some inconveniences, there is latency between the trigger signal and the reported trigger, also if the trigger pattern lasts less than one cycle at 66Mhz the trigger can be lost, and finally as the trigger always runs at maximum speed on lower speeds there may happen a “glitch”, the trigger is raised because the pattern was found but the sampling program does not register this as it runs at a lower speed.

Finally we have the fast trigger, this uses a very clever “hack” (thanks to alastairpatrick from the Raspberry forums for the idea) that abuses the limitations of the PIO units. Each PIO unit can handle only 32 instructions, so the program counter of a state machine rolls to 0 if it’s overflown, also the PIO assembler has an instruction to MOVe data from the IN pins to the program counter, and finally the PIO assembler allows to modify pin values on each instruction without using any extra cycle. So, said that, the trick consists on create a full 32 instruction program that moves the values from the GPIO to the PC and the instructions that are allocated in indexes that match the required pattern block the execution and sets a GPIO to 1. Of course this limits the possibilities for the pattern, we can use up to 5 channels for this trigger but the trigger will run at full speed (it can work even faster, up to 200Msp).

If you want more info about the triggers check the PIO code in the source as there is more explanation on how this works.”