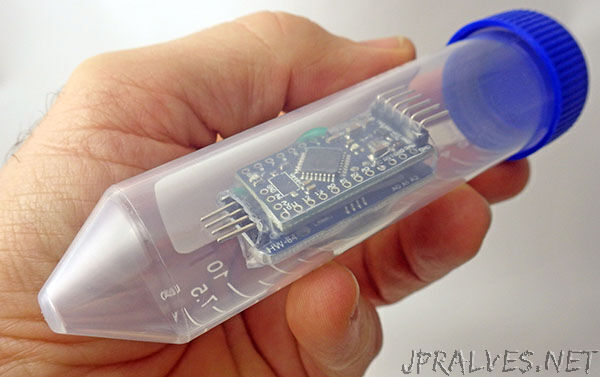 “The EDU build we released in 2020 provides remarkable flexibility for courses in environmental monitoring. However an instructor still needs to invest about five days ordering parts, testing components, and preparing kits for a 15-20 seat course being run remotely. (only 1/2 that is needed for in-person courses where the students pin & test the parts themselves) While that’s not unusual for university-level lab based subjects it is something of a stretch for high school teachers. And thanks to COVID chip shortages, many modules that were only 99¢ at the beginning of this project could now set you back $5 each. So with all that in mind, we’ve continued development of a ‘lite’ version of our logger with the lowest possible prep. That new baby is now ready for release with data download & control managed through the IDE’s serial monitor window.

With just three core components as our starting point, the only hardware option was to remove the SD card. Groundwork for this change was already in place with our use of an EEprom to buffer data so that high-drain SD saves only occurred once per day. Getting rid of power hungry cards also opened up the possibility of running the entire unit from the coin cell on the RTC. But a power budget that small will necessarily add complexity to the base code, which must minimize run-time even though EEproms are notoriously slow devices. And most garden-variety memory chips have a lower limit of 2.7v – so a nominal 3v CR2032 can only be allowed to fall about 300mv under load before we run into trouble. That voltage drop increases over time because the internal resistance of a coin cell is only 10 ohms when new, but approaches 100 ohms by end of life. In addition, it’s not unusual to see a 50mv delta at the battery terminals for every 5°C change in ambient.

But if theres one thing I’ve learned on this project it’s that datasheets only tell you so much about system behavior in the real world – especially with stuff constructed from ‘Lego-style’ modules carrying half a dozen unspecified bits. So let’s just build one and see how it goes…”