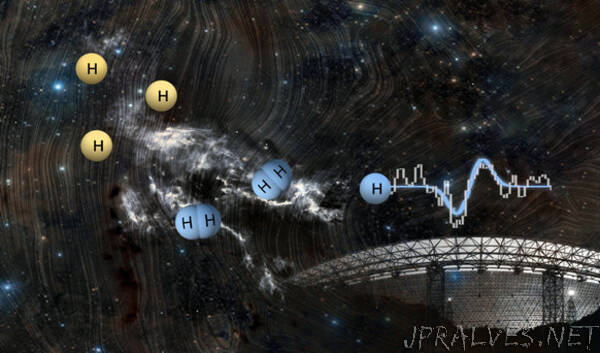 While Michael Faraday was already probing the link between magnetism and electricity with coils in the early 19th century in the basement of the Royal Institution, astronomers nowadays still cannot deploy coils light-years away.

The team employed the so-called HI Narrow Self-Absorption (HINSA) technique, first conceived by LI Di and Paul Goldsmith based on Arecibo data in 2003. FAST’s sensitivity facilitated a clear detection of the HINSA’s Zeeman effect. The results suggest that such clouds achieve a supercritical state, i.e., are primed for collapse, earlier than standard models suggest.

“FAST’s design of focusing radio waves on a cable-driven cabin results in clean optics, which has been vital to the success of the HINSA Zeeman experiment,” said Dr. LI.

The study was published in Nature on January 5.

In 2003, the spectra of molecular clouds were found to contain an atomic-hydrogen feature called HINSA, which is produced by hydrogen atoms cooled through collisions with hydrogen molecules. Since this detection was made by the Arecibo telescope, the Zeeman effect for HINSA has been deemed a promising probe of the magnetic field in molecular clouds.

HINSA has a line strength 5 - 10 times higher than that of molecular tracers. HINSA also has a relatively strong response to magnetic fields and, unlike most molecular tracers, is robust against astrochemical variations.

FAST’s HINSA measurements put the magnetic field strength in L1544 at about 4 μGauss, i.e., 6 million times weaker than that of Earth. A combined analysis with quasar (active supermassive blackhole) absorption and hydroxyl emission also revealed a coherent magnetic field structure throughout the cold neutral medium, the molecular envelope, and the dense core, with similar orientation and magnitude.

Therefore, the transition from magnetic subcriticality to supercriticality - i.e., when the field can and cannot support the cloud against gravity, respectively - occurs in the envelope instead of the core, in contrast with the conventional picture.

How the interstellar magnetic field dissipates to enable cloud collapse remains an unsolved problem in star formation. The main proposed solution has long been ambipolar diffusion - the decoupling of neutral particles from plasma - in cloud cores.

The coherence of the magnetic field revealed by the HINSA Zeeman effect means that dissipation of the field occurs during the formation of the molecular envelope, possibly through a different mechanism than ambipolar diffusion.”