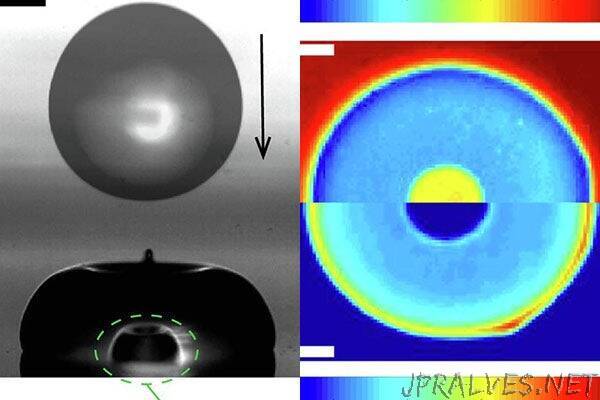 “When driving in the rain, it’s preferable that the raindrops roll or bounce off of the windshield instead of coating it or even freezing. A team of engineers in the McKelvey School of Engineering at Washington University in St. Louis found that conduction of heat plays a larger role than previously thought in the dynamics of droplets on smooth surfaces that repel water.

Patricia Weisensee, assistant professor of mechanical engineering & materials science, and Junhui Li, a doctoral student in her lab, made the finding after using high-speed imaging methods to study a microscopic entrapped bubble that forms when droplets of water hit a heated, smooth, water-repellant surface. Results of the research are published in the Experimental Thermal and Fluid Science Jan. 1, 2022 print issue.

The bubble — only a few hundred microns in size — forms inside a water droplet from absorbing the air underneath it as it begins to lift off from the surface.

“We’re creating capillary waves on the droplet, because as the droplet impacts, it compresses, and that sends a shockwave through the droplet and creates a doughnut-shaped droplet with the air bubble entrapped in the middle,” Weisensee said.

In her lab, Weisensee and Li tested water droplets on three heated surfaces: Teflon and two materials that have similar surface chemistry: PDMS, a biocompatible material; and HTMS, a hydrophobic silane-based monolayer coating. Using synchronized high-speed optical and high-speed infrared imaging, they found that the amount of heat transferred from the smooth surface to the water droplet increases with increased spreading velocity. In addition, they found that the bubble changed in size and shape as the temperature of the surface increased. Interestingly, during the retraction of the droplet, the total heat transfer was reduced by 5.6% and 7.1% at surface temperatures of 50C and 65C, respectively, as the bubble reduced the total liquid-solid interface area. Overall, this entire process lasts only a few milliseconds, but can have a profound influence on the cooling efficiency and droplet dynamics of these systems.

“We found that thermal conduction was the most prominent form of heat transfer during droplet impact over convection or evaporation,” Weisensee said.

In addition, they tested the droplets on a rough surface. The droplets showed a smaller spreading area due to enhanced friction, a smaller heat transfer area, and consequently, a lower rate of heat transfer, which would ultimately lower the efficiency of, for example, spray cooling processes.

“Though we used heated surfaces for this particular study, our findings also have implications for other systems where you have droplets impacting a surface, such as a windshield, an airplane wing or a wind turbine blade,” she said. “For example, in cold conditions, you don’t want the droplets to stay there and freeze. Lifting off is important so that you don’t flood a surface or accumulate a lot of liquid on the surface. So you need know the interplay of droplet dynamics and heat transfer.”

Funding for this research was provided by the National Aeronautics and Space Administration (80NSSC20K0072).”