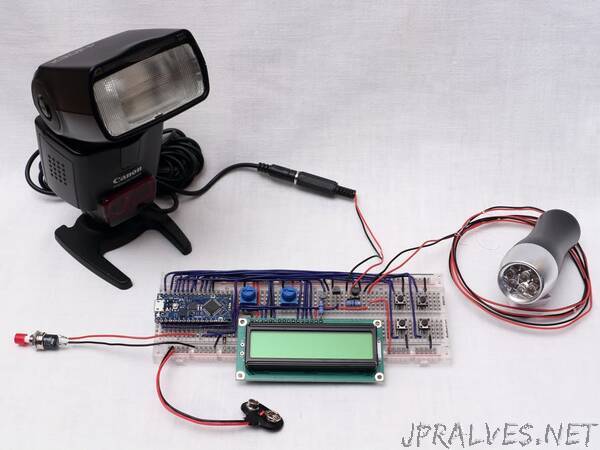 “This stroboscope is a precise and versatile instrument which can be used to analyze periodic or fast motions.

This stroboscope is said to be serious because it is not intended for fun or entertainment in the nightclubs. Rather it is a precise and versatile instrument which can be used to measure the rotation speed of a motor, or to analyze periodic movements such as that of a vibrating string. Optionally, it can be connected to an electronic flash in order to decompose and photography fast motions. Moreover, it can be synchronized on an external signal in order to convert it into a timing light, which can be used to set the ignition time of an old car engine.

Principles
It is designed around an Arduino Nano Every. The flashes are produced by a 9 LEDs ordinary torch whose 4.5 V battery has been replaced by two wires connected to the stroboscope circuit. The period and the duration of the flash can be set using four pushbuttons. Their values are displayed on a standard 16x2 characters liquid crystal display. They vary from 0.1 ms to 999.9 ms with a resolution of 0.1 ms.

The pushbuttons increase or decrease the flash period or duration at a speed increasing with the time during which the button has been pressed. This speed follows a law which can be changed easily in the code.

The LCD used to display the period and the duration is compatible with the liquidCrystal library and it is connected in the same way as in the examples of this library, except for the backlight which is adjustable by a potentiometer.

The stroboscope can drive an optional electronic flash by shortening briefly its central contact to the ground at each period. This flash can be used alternatively or simultaneously with the LED torch.

The synchronization of the stroboscope is obtained by shortening a digital input to the ground. When this input is grounded, the flash emission is stopped. When it is open again, the flash is emitted exactly one period later. Caution: when setting the ignition time of an engine, do not apply any voltage from the ignition system to the synchronization input, it could destroy the Arduino card.”