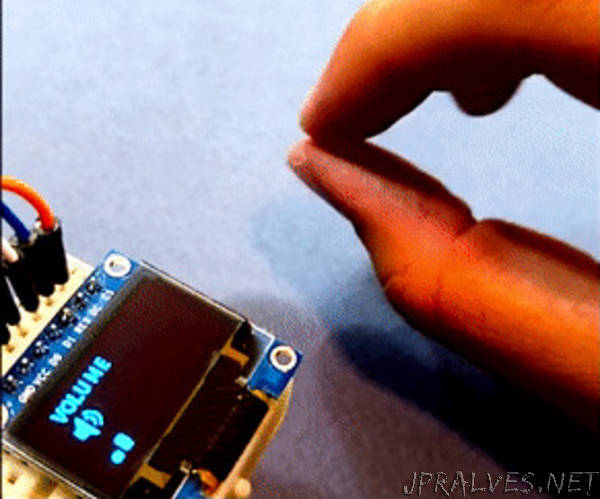 “In this article, we’ll show you how to make a gesture detector by simple components like the PIR sensor and Arduino Nano. At the end of this article you can:

- Explain PIR sensor applications and how it works
- Run an 8-Pixel PIR sensor named TPA81
- Use the PIR sensor to detect motion and gesture by Arduino
- Make a cool detector to increase or decrease your speaker volume.

A passive infrared sensor (PIR sensor) is an electronic sensor that measures infrared (IR) light radiating from objects in its field of view. They are most often used in PIR-based motion detectors.

All objects with a temperature above absolute zero emit heat energy in the form of radiation. Usually, this radiation isn’t visible to the human eye because it radiates at infrared wavelengths, but it can be detected by electronic devices designed for such a purpose. The term passive in this instance refers to the fact that PIR devices do not generate or radiate energy for detection purposes. They work entirely by detecting infrared radiation emitted by or reflected from objects. They do not detect or measure heat. (Source: Wikipedia)

The TPA81 is a thermopile array detecting infra-red in the 2um-22um range. This is the wavelength of radiant heat. The Pyro-electric sensors that are used commonly in burglar alarms and to switch on outside lights, detect infra-red in the same waveband. These Pyro-electric sensors can only detect a change in heat levels though – hence they are movement detectors. Although useful in robotics, their applications are limited as they are unable to detect and measure the temperature of a static heat source. Another type of sensor is the thermopile array. These are used in non-contact infra-red thermometers. They have a very wide detection angle or field of view (FOV) of around 100° and need either shrouding or a lens or commonly both to get a more useful FOV of around 12°. Some have a built-in lens. More recently sensors with an array of thermopiles, built-in electronics, and a silicon lens have become available. This is the type used in the TPA81. It has an array of eight thermopiles arranged in a row. The TPA81 can measure the temperature of 8 adjacent points simultaneously. The TPA81 can also control a servo to pan the module and build up a thermal image. The TPA81 can detect a candle flame at a range of 2 meters (6ft) and is unaffected by ambient light!

PIR sensors are similar to cameras that only can see warm things. So TPA81 is a thermal camera with 8-pixel resolution, and of course, the Human body always emits heat. Now, If we control the PIR Sensor by a controller and define some gesture for PIR Sensor, we can make a simple gesture detector.”