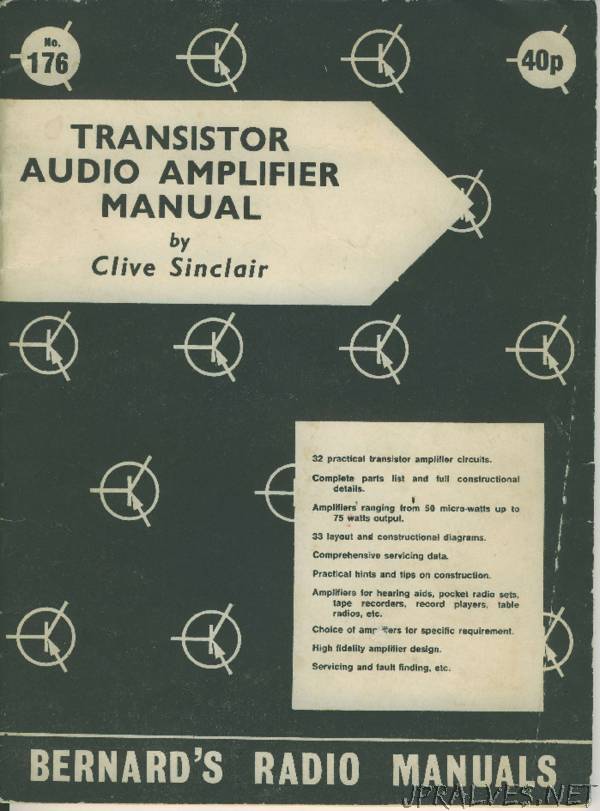 “In Book I of ” practical Transistor Audio Amplifiers ” .I dealt with
the basic principles lnvolved rn transistor A.F. amplifier desien ind
the practical examples given w&e maintv limiteO to slngle stages. In
this second book the-situation rs reversed and all tbe space is devoted
to practical applifier circuits employing all the princi^ples and
rcleas already described. Most of the circuits may be built as they
stand but in a few cases the transistors required are not yet
available. These last mentioned circuits have -been included- however,
for the sake of completeness and so that the book will not be out of
date for a long while to come. .Because the Tnge-of lmnJifie1 sizes
used is very wide, from a few hundred microwatts to manv watts, the
book has been divided into sections classified according to the power
of the amplifiers described. The sections cover amplifiers oi from
0-l0mW, 10-100mW, 100mW-1W and 1-75 W. Amplifiers that could fall into
either of two sections are included in the latter. For exaqp^le, _q-
100 mW amplifier would appear in the 100 mW to I W sectioi and not in
thJ’plevious one. - Since this book leads on from the last one, the
technical details given there are not reoeated here -except where an
unusual applicatiori of a clrcuit is described or where the circuit
itself is unusual. Most of the text is devoted to oerformance
specifications of the amplifiers aird their component values. I have
included as- ma,ny,amplifiers as space would allow but there has nia to
be quite a l6t of selection. Because most readers wili be mainit
concerned with the medium and low power amplifiers these have been
given more spaie than thbse in the high power section which are of the
public address size”