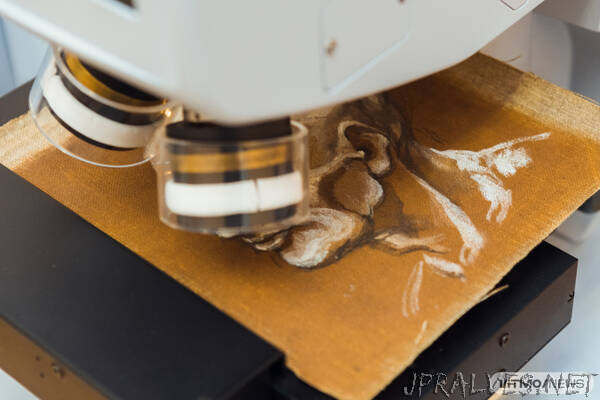 “In collaboration with the staff of the State Russian Museum, researchers from ITMO University have developed a new method for detecting painting authenticity with infrared spectroscopy. The method will allow the museum’s experts to quickly identify a painting’s chemical compounds and the century it was created in, as was demonstrated by a test analysis performed on a copy of one of Ivan Aivazovsky’s creations. In the future, the new method will help identify the authenticity of pieces from the era of Russian avant-garde.

Chemistry and ownership in one study
Some of the common methods to identify a painting’s authenticity are ultraviolet luminescence, X-ray diffraction, infrared reflectography, and X-ray fluorescence. However, all of them allow specialists to analyze only a painting’s exterior, without looking into the molecular compounds of the paint used to create it.

Researchers from ITMO’s have developed a semiquantative method based on infrared spectroscopy that can solve several tasks in just 30 seconds. Not only does the suggested method identify a painting’s chemical composition, evaluating the concentration and weight content of a specific substance, but it also makes it possible to determine the century when specific layers of paint have been applied. Using this method, researchers and art historians will be able to tell if they are working with an original painting and whether it was ever subject to restoration, as well as discover the pigments and binding materials in oil paint that were characteristic of a certain artist.

Analyzing a copy of an Aivazovsky piece
As a test object for the new method, the researchers chose a copy of Ivan Aivazovsky’s painting A Bird’s-Eye View of the Prince Islands near Constantinople on the Marmara Sea, created by one of his contemporaries, who remained anonymous. The choice of Aivazovsky specifically wasn’t random: being a very prominent and prolific artist of the 19th century, he has left quite an extensive heritage – and his work has often fallen victim to forgery in the past.

In the study, the researchers cut out a piece of the copy and asked restorers from the State Russian Museum to put a signature on it in oil paint, which they then covered with more paint in a different color. On the other side of the piece, the specialists sketched a human head on a brown background. After that, samples were taken from both sides of the pieces, then inserted into a diamond crystal and subjected to infrared radiation. In this process, a part of the waves were absorbed by the binder, while a part of them went through. After this experiment, the researchers compared the absorption spectra of binders and pigments from the copy with each other and with samples from the databases of the museum and ITMO’s Heritage Science Lab.

As a result, they discovered that the degree of polymerization in oil paint is different in layers from different periods. In other words, after application, the paint hardens, but it can still engage in chemical reactions with the pigments it is made from. In turn, the changes in the chemical composition of the pigments that happened at different times are seen differently in the infrared spectrum. Thanks to this discovery, the researchers can now say precisely in which century a certain layer of paint was applied and thus identify a painting’s authenticity.

In the future, specialists from the State Russian Museum are planning to use the new method in their expert analysis to confirm a piece’s originality and also adapt it to work with paintings from other periods, such as the Russian avant-garde of the 1910s, which is also characterized by an abundance of forged and copied pieces.

This research was supported by a grant from Order No. 220 of the Government of the Russian Federation dated April 9, 2010.”