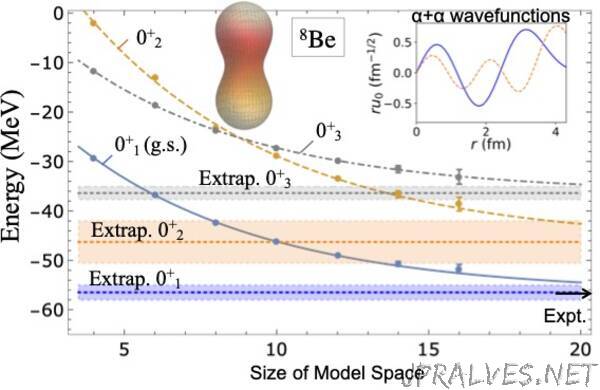 Physical Review Letters, PRL, the world’s premier physics letter journal, has published two papers by a team of Louisiana State University nuclear physics researchers to advance the knowledge on the important implications for understanding the physics of the weak nuclear force.

The weak nuclear force is currently not entirely understood, despite being one of the four fundamental forces of nature. In a pair of Phys. Rev. Lett. articles, a multi-institutional team, including theorists and experimentalists from LSU, Lawrence Livermore National Laboratory, Argonne National Laboratory and other institutions worked closely together to test physics beyond the “Standard Model” through high-precision measurements of nuclear beta decay.

By loading Lithium-8 ions, an exotic heavy isotope of lithium with a less than one second half-life, in an ion trap, the experimental team was able to detect the energy and directions of the particles emitted in the beta decay of Lithium-8 produced with the ATLAS accelerator at Argonne National Laboratory and held in an ion trap. Different underlying mechanisms for the weak nuclear force would give rise to distinct energy and angular distributions, which the team determined to unrivaled precision.

State-of-the-art calculations with the ab initio symmetry-adapted no-core shell model, developed at Louisiana State University, had to be performed to precisely account for typically neglected effects that are 100 times smaller than the dominant decay contributions. However, since the experiments have achieved remarkable precision, it is now required to confront the systematic uncertainties of such corrections that are difficult to be measured.

In their paper, “Impact of Clustering on the 8Li Beta Decay and Recoil Form Factors,” Phys. Rev. Lett. 128, 202503, the LSU-led collaboration places unprecedented constraints on recoil corrections in the β decay of 8Li, by identifying a strong correlation between them and the 8Li ground state quadrupole moment in large-scale ab initio calculations. The results are essential for improving the sensitivity of high-precision experiments that probe the weak interaction theory and test physics beyond the Standard Model. Dr. Grigor Sargsyan led the theoretical developments while he was a PhD student at LSU, and is currently a postdoctoral researcher at Lawrence Livermore National Laboratory (LLNL).

In “Improved Limit on Tensor Currents in the Weak Interaction from 8Li β Decay,” Phys. Rev. Lett. 128 202502, researchers present the most precise measurement of tensor currents in the low-energy regime by examining the β−¯ν correlation of trapped 8Li ions with the Beta-decay Paul Trap. The results are found to be consistent with the Standard Model prediction, ruling out certain possible sources of “new” physics and setting the bar for precision measurements of this kind.

“This has important implications for understanding the physics of the tensor current contribution to the weak interaction,” said LSU Assistant Professor Alexis Mercenne. “Heretofore, the data has favored only vector and axial-vector couplings in the electroweak Lagrangian, but it has been suggested that other Lorentz-invariant interactions such as tensor, scalar, and pseudoscalar, can arise in the Standard Model extensions.”

“These are remarkable findings – the level of theoretical precision reached in ab initio theory beyond the lightest nuclei is unprecedented, and opens the path to novel high-precision predictions in atomic nuclei rooted in first principles,” said LSU Associate Professor Kristina Launey. “In addition, no one expected that these theoretical developments would unveil a new state in 8Be nucleus that has not been measured yet. This nucleus is notoriously difficult to model due to its cluster structure and collective correlations, but become feasible for calculations in the ab initio symmetry-adapted no-core shell-model framework.”

The excitement of modern nuclear physics is its interdisciplinary nature and the use of a wide range of techniques and tools. LSU has both experimental and theoretical research groups in nuclear physics, with strong connections to the high-energy physics and astrophysics/space science groups. The principal focus of the experimental and theoretical groups is in the area of low-energy nuclear structure and reactions, including the study of nuclei far from stability and applications to astrophysics.

Physical Review Letters (PRL), the world’s premier physics letter journal is the American Physical Society’s flagship publication. Since 1958 it has contributed to APS’s mission to advance and diffuse the knowledge of physics by publishing seminal research by Nobel Prize–winning and other distinguished researchers in all fields of physics.

Links to the PRL publications: