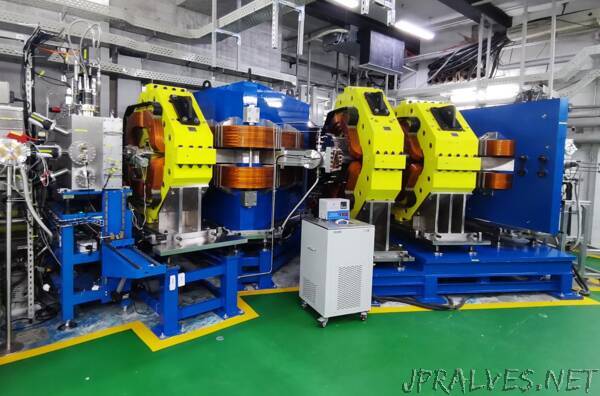 “A research team at the Institute of Modern Physics (IMP) of the Chinese Academy of Sciences (CAS), together with their collaborators, has recently synthesized a new isotope, actinium-204, which is the lightest actinium isotope so far discovered and the fourth actinium isotope beyond the proton-drip line. The study has been published in Physics Letters B.

Scientists performed the experiments at the Heavy Ion Research Facility in Lanzhou (HIRFL) and the China Accelerator Facility for superheavy Elements (CAFE2). The new isotope actinium-204 was produced in the fusion-evaporation reaction and identified via the recoil-α correlation at the gas-filled recoiled separators. This is the 35th nuclide synthesized at IMP.

Scientists then determined its α-particle energy and half-life to be 7948 keV and 7.4 ms, respectively. Both of them are consistent with the theoretical prediction.

For many isotopes, the odd-even staggering of half-life is strictly synchronized with that of α-particle energy. However, scientists found that this rule is not appropriate to actinium-204 as well as some other isotopes with less than 119 neutrons. This phenomenon reveals the blocking effect to α-decay process caused by the unpaired neutron in actinium-204. In other words, the unpaired neutron reduces the probability of forming an α cluster near the surface of the actinium-204 nucleus.

This study provided experimental data about mass and α-decay of the new isotope actinium-204, and contributed to the understanding of the role of unpaired nucleon in α-decay process.”