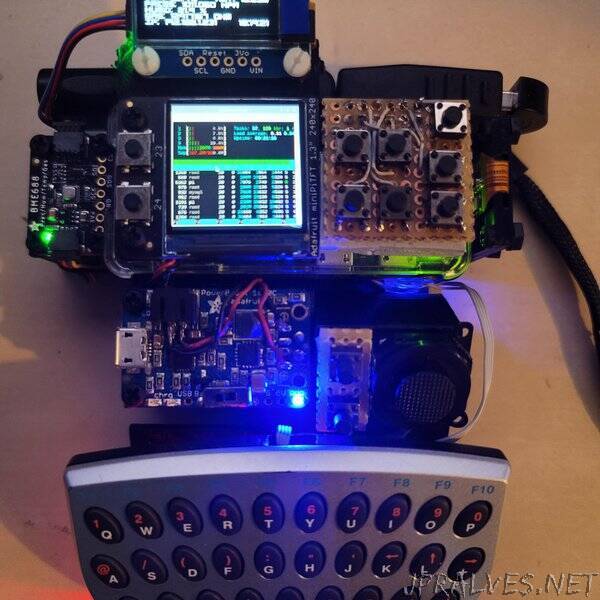 “A mini folding cyberdeck based around a Raspberry Pi Zero 2 W, a Zero4U USB Hub, a DreamGear MiniKey, and an Adafruit Mini PiTFT 1.3”

This is a little project I’ve been working on and off for a few months now. The goal was to build a tiny cyberdeck that could fit in my pocket and would have USB expansion ports for peripherals. I also wanted it to be fully modular with minimal soldering so that parts can be easily upgraded/replaced with minimal effort.

Some notable features include:

- An 18650 LiPo battery that also acts as the pin for the folding hinge mechanism
- An Arduino Pro Micro and USB hub board located under the keyboard that uses a 2-axis analog joystick to emulate a mouse, and two tac buttons for right and left click
- A custom tac button board with seven buttons mapped to GPIO, to emulate keys that aren’t on the keyboard
- An Adafruit BME688 Temperature, Humidity, Pressure and Gas Sensor, located on the left and connected via Qwiic/Stemma QT connector
- Secondary OLED display with BME688 sensor readings
- Three USB ports at the top that can be used for expansion dongles such as audio, Ethernet, SDR, etc.
- An Adafruit Zero Spy Camera module located on the right side (Accessible via HTTP stream)
- An Adafruit DS3231 Precision RTC
- Simultaneous WiFi AP & client mode (can connect to a network via WiFi or Ethernet, and also broadcast its own SSID that can be connected to as an access point)”