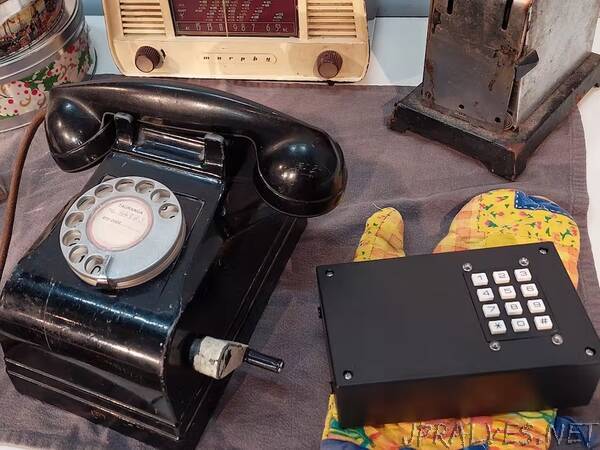 Story
I’ve been an amateur theatre nut for 50 years and was challenged to make a 1950’s party line telephone ring on stage with various ringing cadences for the Pip Hall play “Up North”. I used to be a telephone technician for some 20 years in the 70’s and 80’s, so am familiar with the requirements to make this work: 60VAC at 20Hz. Plus up to ten ringing cadences using Morse code for the letters A, D, J, K, M, R, S, U, W and X. Then I’ll be operating this as well as playing the music, the sound effects and operating the lighting, so I’ll have my hands full during the performances too!

I decided to use an Arduino Nano to generate both the ringing cycles of 20Hz as well as the various ringing cadences. A 12 button keypad is used as an input to tell the Nano which cadence to ring. The 5V square wave pulses are then boosted to 12V using a pair of MOSFETs and further boosted to around 60V using a mains to 12V transformer in reverse.

Things to take into account are that the telephone bells consist of two 500Ω coils in series, so at 60V this would draw up to 60mA, which amounts to 3.6W. The transformer is designed to work with an sine wave input of 230V, at 50Hz. Running it backwards with square waves at 20Hz will reduce its efficiency considerably. So, to be safe, I used a transformer rated at twice the required power, 7.2VA. And I decided to limit the input current by placing a 20Ω resistor in series with the 12V supply. This would limit the current to 600mA (if the transformer were treated as a short circuit). This would then result in 7.2W, the rating of the transformer. In order to ensure that the resistors don’t get destroyed by overheating at this current, I used five 100Ω metal oxide resistors in parallel. In fact, the current is less than half of that, so we’re well within the components’ specifications.

Further to the transformer efficiency: with 230V in and 12.6V out, this is a ratio of around 18 to 1. I measured around 8VAC on the (now) input and around 40VAC on the output, giving a ratio of 5 to 1 - quite some difference! I don’t know how accurate my multimeter is on square waves at 20HZ, but this is a good indication of what’s happening.

The power supply is a 12VDC plug pack. The power to the Nano comes from a buck converter set to 5V.

BACKGROUND: PARTY LINES
Because of the huge distances involved, back in the days of landline telephones (or POTS, Plain Old Telephone Service), most of the rural areas around New Zealand would be served with a manual telephone service, and each telephone line consisting of one pair of wires, would have up to ten subscribers on it. In other words, up to ten homes sharing the same telephone number, except for the suffix of one letter. This meant that should someone wish to make a telephone call, they would first check that the line isn’t being used by someone else, and then crank the handle of a magneto generator which would generate a ringing signal and ring all the other phones on the line as well as alert the operator at the telephone exchange.

For incoming calls, every time the phone rings you would take a note of the ringing pattern to see if it’s yours before answering the call.

When a number of these manual exchanges (UMX - Unit Manual Exchange) were replaced with automatic ones (UAX - Unit Automatic Exchange), party lines were kept by installing “R” Units. (Each “Unit” was a rack of equipment serving a specific number of subscribers). The “R” Unit would convert one of the telephone number’s digits to the Morse code ringing signal. So each home would have a slightly different phone number, but would still be across the same line and receive the ringing for everyone else on the line as well as their own.”