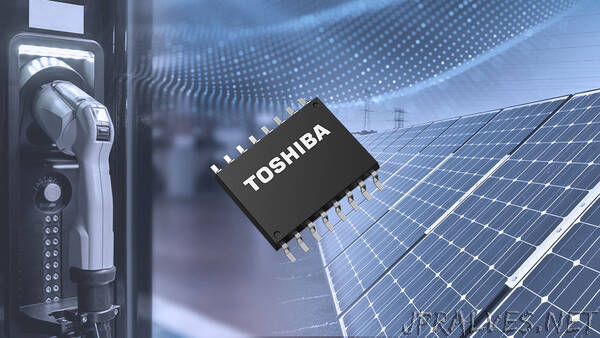 TLP5222 constantly monitors the drain-source voltage (VDS) or collector-emitter voltage (VCE) of the power device that it drives. Built-in overcurrent detection and a protective function detect any rise in VDS or VCE, the result of overcurrent generated in the power device, and gently turn it off.

The new photocoupler also has a built-in automatic recovery function that resets the product to normal operation 25.5μs (typ.) after protective operation is triggered. This simplifies sequence setting in the controller. It also incorporates an isolated FAULT status feedback function that transmits a fault signal to the controller when overcurrent is detected, and an active Miller clamp function that prevents upper and lower power devices from being short-circuited, helping to simplify design and reduce external circuits.

Housed in an SO16L package that ensures creepage and clearance distances of 8mm (min), TLP5222 can also be used in equipment requiring high insulation performance. In addition, with its wide rated operating temperature range of between -40°C and 110°C, it is suitable for various applications in harsh thermal environments such as photovoltaic power generation systems and uninterruptible power supplies (UPSs).

The lineup also includes TLP5212, TLP5214A and TLP5214, which do not have a built-in automatic recovery function but reset to their normal operation by a signal input to their LED, allowing users to select the right products for use conditions.