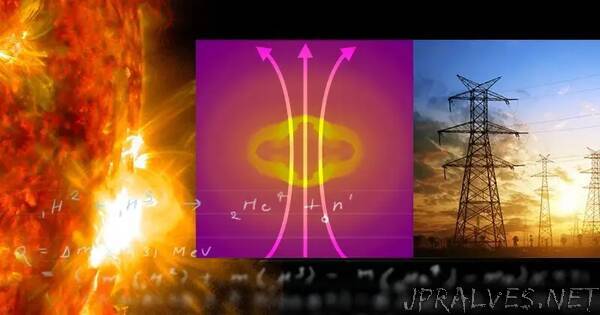 “Imagine trying to summon the sun to your research laboratory.

Yes, you, big bright star! Bring your searing heat, the drama of your core’s constant nuclear fusion and your off-the-charts energy levels with you. We want to know how to make this fusion energy happen here on Earth — at will and efficiently — so we can cross “energy supply” off our list of worries forever.

But, of course, the sun can’t actually get to the lab. It lives too far away — some 93 million miles — and it is way too big (about 864,000 miles in diameter). It’s also way too hot and denser than anything on Earth. That’s why it can sustain the reactions that generate all the energy that powers life on Earth.

This has not discouraged scientists from pursuing their quest for nuclear fusion, of course.

Instead, they have found extraordinary ways — using intense lasers and hydrogen fuel — to produce extreme conditions like those that exist in the sun’s core, producing nuclear fusion in tiny 1 millimeter plastic capsules. This approach is called “inertial confinement fusion.”

The challenge is to create a system that generates more fusion energy than is required to create it.

This is exceptionally challenging because it requires high-precision experiments at extreme conditions, but researchers have made major advances in the science and technology required to produce controlled laboratory fusion in recent decades.

Now University of Delaware researcher Arijit Bose and his collaborators are pursuing a promising variation of this approach. Their work was published recently in Physical Review Letters.

They have applied powerful magnetic fields to the laser-driven implosion, which may allow them to steer fusion reactions in ways previously unexplored in experiments.

Bose, an assistant professor in UD’s Department of Physics and Astronomy, started his study of nuclear fusion during graduate school at the University of Rochester.

After touring the Laboratory for Laser Energetics at Rochester, where lasers are used to implode spherical capsules and create plasmas, known as “inertial confinement fusion,” he found a focus for his own research.

“Fusion is what powers everything on Earth,” he said. “To have a miniature sun on Earth — a millimeter-sized sun — that’s where the fusion reaction would happen. And that blew my mind.”

Laser-driven nuclear fusion research has been around for decades, Bose said.

It started at Lawrence Livermore National Lab in the 1970’s. Livermore now hosts the largest laser system in the world, the size of three football fields. The fusion research done there uses an indirect approach. Lasers are directed into a small 100-millimeter-sized can of gold. They hit the inner surface of the can and produce X-rays, which then hit the target — a tiny sphere made of frozen deuterium and tritium — and heat it to temperatures near the core of the sun.

“Nothing can survive that,” Bose said. “Electrons are stripped from the atoms and the ions are moving so fast that they collide and fuse.”

The target implodes within a nanosecond — a billionth of a second — first driven by the laser, then continuing to compress on its own inertia. Finally, it expands because of the increasing central pressure caused by the compression.

“Getting a self-heated fusion chain reaction to start is called ignition,” Bose said. “We are remarkably close to achieving ignition.”

Researchers at Livermore reported impressive new gains in that effort on Aug. 8.

Rochester’s OMEGA laser facility is smaller and is used to test a direct-drive approach. That process uses no gold can. Instead, lasers hit the target sphere directly.

The new piece is the powerful magnetic field — in this case, forces up to 50 Tesla — that is used to control the charged particles. By comparison, typical magnetic resonance imaging (MRI) uses magnets of about 3 Tesla. And the magnetic field that shields the Earth from the solar wind is many orders of magnitude smaller than 50T, Bose said.

“You want the nuclei to fuse,” Bose said. “The magnetic fields trap the charged particles and make them go around the field lines. That helps create collisions and that helps boost fusion. That’s why adding magnetic fields has benefits for producing fusion energy.”

Fusion requires extreme conditions, but it has been achieved, Bose said. The challenge is getting more energy output than input and the magnetic fields provide the push that can make this approach transformative.

The experiments published in Physical Review Letters were done when Bose was doing postdoctoral research at MIT’s Plasma Science and Fusion Center. That collaboration continues.

Bose said he was drawn to the University of Delaware, in part, because of the plasma physics focus in the Department of Physics and Astronomy, including William Matthaeus, Michael Shay and Ben Maruca.

“They do studies and analysis of data coming from the NASA solar program and all its missions,” he said. “We conduct laboratory astrophysics experiments where these phenomena are scaled down in space and time to the lab. This gives us a means to unravel some of the intricate physics questions posed by NASA missions.”

Students are important drivers of this work, Bose said, and their careers can see great advancement in this new field of study.

There is much more work to do, he said.

“We won’t have a solution tomorrow. But what we’re doing is contributing to a solution for clean energy.””