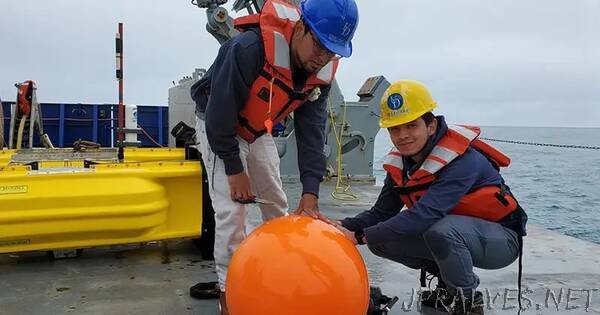 “About 125 miles off the New England coast, a small group of researchers from the University of Delaware’s College of Engineering are harnessing the power of underwater acoustics, big data and machine learning to better understand what lies deep beneath the surface.

Just as marine mammals like bottle-nose dolphins use echolocation to emit pulses of sound to detect objects underwater, so too are these researchers relying on the phenomenon of sound waves and how they reverberate to understand what they cannot see. By using acoustic technologies that can transmit signals and information in a complex aquatic environment, engineers can study the ocean at a much larger scale and finer details than currently possible.

“This remote sensing is similar to using ultrasound for exploring the inside of the human body, except here we use different sound frequencies and we aim to study inside the ocean environment,” said Mohsen Badiey, an acoustic oceanographer and electrical engineering professor. “Now, say we can modernize that process. The research we’re doing is remote sensing of the properties of the environment from within the water column.”

The team, led by Department of Electrical and Computer Engineering’s Badiey and Lin Wan, an assistant professor, is measuring underwater sound in order to determine the composition and the physical properties of the ocean environment.

“By emitting sound between two locations and processing the received acoustic signals, while also using artificial intelligence and machine learning algorithms for data analysis, we can determine the properties of the ocean environment remotely,” Badiey said.

The data they’re collecting can be used to develop machine learning algorithms to show how underwater sounds change over time and across distances, which could in turn help researchers, aided by artificial intelligence, accomplish many objectives such as mapping sediments beneath the ocean floor, long-term monitoring of climate change and assessing the aquatic environments.

They’ve already extracted valuable information from similar studies in the Arctic, where UD researchers have been capturing the sounds of bearded seals, the largest species of Arctic seals. By analyzing the many different calls of these 600-to-800-pound animals, they have learned that these seals can actually tell us when the Arctic sea ice starts breaking — because they all go completely silent.

“Acoustics can be used to estimate ocean properties,” Wan said. “That means people don’t have to go to the ocean at a certain point to collect core samples from the deep seabed. With acoustics, we’ll be able to estimate how many layers there are in the bottom and what is the layer structure, as well as the water column temperature or the sea surface wave roughness. Remote sensing will be a very important tool for the future exploration in the ocean.”

Earlier this summer, Badiey, Wan and doctoral electrical and computer engineering students Christian Escobar-Amado and Jhon Castro-Correa went to sea on the Woods Hole Oceanographic Institution’s Neil Armstrong research vessel to deploy custom-made devices to capture acoustic data through high-tech arrays designed and fabricated with electronic components from different companies, which were placed in water reaching depths of 80 meters (just over 260 feet) along the New England continental shelf. A yellow subsurface buoy in the water was connected to a stringy skeleton of white fabric covered with arrays and connected to underwater sound recorders, called hydrophones, to passively capture sound at different depths. The arrays also include environmental sensors to capture additional information, such as temperature and conductivity of the water.

Escobar-Amado said the opportunity to work on a research vessel provided him a new perspective he didn’t expect.

“As an engineer focused on signal processing and machine learning, it was a great experience to go into the field,” he said. “I had the chance to experience firsthand how challenging yet rewarding it is to obtain data in such a harsh and large environment as the ocean. With this project, I feel we are making an impactful and meaningful contribution to science.”

Meanwhile, undergraduate students involved with this research are learning about the technology of acoustics waves, sensors, environmental measurements and the ocean, while Kenneth Barner, Charles Black Evans Professor of Electrical Engineering, assists with the machine-learning aspects of the work.

“It’s really timely to use these kinds of tools along with innovative analysis techniques, like machine learning, to address such complex problems,” Barner said. “This is a real collaboration between researchers in physics, engineering, oceanography and applied signal processing. There’s a significant interest in achieving a better understanding of how sound propagation in water can be utilized to gain knowledge about our fast changing environment.”

This team from UD was just one among a multi-institutional research group funded by the Office of Naval Research that also includes researchers from six other major universities, the commercial sector and national labs. Each team is conducting its own educational and research activities in electrical engineering and applied physics involving various areas of underwater research. Observers from other universities also attended this multi-institutional experiment.

“The ocean acoustics team led by professors Badiey and Wan will have a transformative impact in areas such as climate change studies and defense through major breakthroughs in sensing the highly complex ocean environment,” said Jamie Phillips, chair of the Department of Electrical and Computer Engineering at UD. “Their work brings together advanced mathematical techniques and sensing systems at the forefront of electrical engineering that result in a major leap in ocean sensing. A unique aspect of this team is that they truly take their work to the next level with real-world experiments at sea, where very few others have the capabilities and expertise.”

With the majority of the planet’s land mass underwater, Badiey said there are a vast amount of resources and possibilities that have yet to be explored — from food production to extraction of minerals, navigation in shipping, underwater communication and energy.

“We need to develop ways to first learn what is out there, and, second, to explore trying to get them,” Badiey said. “Underwater acoustic research can help in various ways to get to both of these.”

Their work can also help scientists and decision-makers better understand climate change through remote sensing and how its impact on increasing ocean temperatures will affect future human needs.

For example, over the last decade, technological advances have led to an explosion of engineers developing sensors and networks, similar to those used by cell phones on land.

“Things are quite different down there,” Wan said. “In order to develop networks in aquatic environments, we need to know how acoustic waves interact with the ocean, as electromagnetic waves have higher attenuation in the ocean than in air and they can not propagate as far as acoustic waves in sea water. Ocean acoustic research, including at-sea experimental measurements, state-of-the-art signal processing and machine learning techniques, as well as high-performance-computing based numerical modelings, will promote our knowledge of ocean environments.”

Acoustic-based measurements have been done for many years, but Badiey, Wan and their team are trying to advance and modernize the field by developing advanced signal processing such as machine learning to complement the existing physics-based techniques to handle faster processing and analysis.

Badiey, a professor of applied marine physics and ocean engineering, brought his background in acoustical oceanography from his time at the University’s College of Ocean, Earth and Environment to the College of Engineering, where he’s shown how electrical and computer engineering truly can have wide-ranging, real-world applications through the Ocean Acoustics and Engineering Lab.

When Castro-Correa, one of the graduate students working on the project, decided to pursue a doctoral degree in the College of Engineering, he never imagined working on a project at sea.

“This is pretty exciting,” he said. “We’re able to do several things at the same time: signal processing, machine learning, studying environmental properties affecting our world, biology, design and development of innovative equipment. We’re putting those things together and doing great things.””