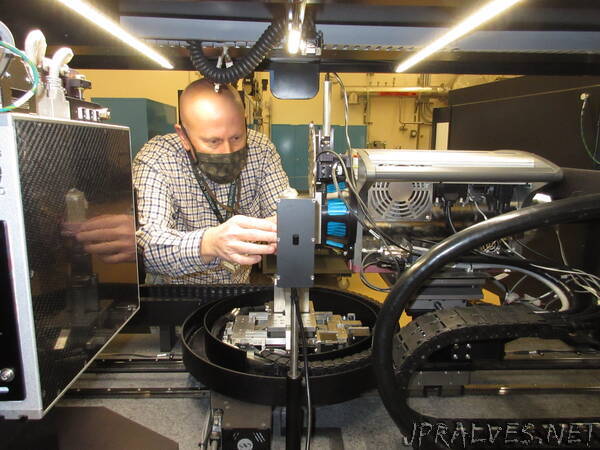 “Idaho National Laboratory is perhaps best known for innovative research that helps shape the clean energy economies of today and tomorrow – and for good reason. But while much of the laboratory’s work is focused on building a sustainable future, INL is also doing its part to preserve the past.

INL researchers recently imaged several fossils using a powerful X-ray microscope. The 3D images will be used to create exhibits for Wyoming’s Fossil Butte National Monument and help experts gain insight into the origins of these and other relics.

The fossils, found in private quarries around Wyoming, were imaged using a technique known as X-ray microscopy. At INL, researchers typically use high-resolution X-ray microscopy to view specimens – such as samples of irradiated nuclear fuel — at a level of detail not possible with conventional microscopes. The depth and granularity afforded by this technique will help paleontologists learn a great deal about these fossils —including an unknown object resembling an insect egg case or pea pod — and the conditions under which they formed.

“You can see the limestone layers as well as submillimeter and thinner organic materials that have been compressed into waxy, pre-petroleum substances around the specimen,” said Arvid Aase, a paleontologist and the museum curator at Fossil Butte National Monument. “These incredibly detailed images will help us determine the organism’s taxonomy and reveal information about its fossilization process, such as how long it was laying on the bottom of the lake covered in microbes before getting buried by limestone.”

The fossilization process may have occurred over a period of months, though the timing still remains unknown, he added.

BURIED IN HISTORY
Limestone is a type of sedimentary rock that usually forms in shallow marine environments. As the remains of organisms with calcium carbonate-based shells, such as mollusks and snails, accumulate on the seabed, they gradually form sedimentary layers. Through a process known as lithification, limestone deposits develop as the calcium carbonate particles consolidate into solid rock formations. These formations often, though not always, contain fossils.

In ancient Fossil Lake, where the unknown object was found, these carbonate molecules created a thin layer over a microbial mat, which recolonized the lake bottom on top of the carbonate sediment many thousands of times. Organisms that settled to the bottom were incorporated into the layers and fossilized. Over hundreds of years, the carbonate mud dried out and the molecules combined to become limestone.

“It appears that the unidentified fossil fell to the lake bottom during a storm, as limestone was present both above and below the fossil,” Aase said. The images will be sent to researchers at the University of Florida as well as in Canada and France to help classify the cryptic fossil. “Based on the morphology, it’s possibly an egg casing, though it could also be a seed structure,” he said.

COLLABORATING FOR SCIENCE
The imaging was conducted at INL’s Irradiated Materials Characterization Laboratory, a facility with sophisticated instruments that are primarily used to examine nuclear fuels and materials at the microstructural level after they’ve been irradiated in a reactor. The facility is one of 50 designated Nuclear Science User Facilities (NSUF) around the country.

The Department of Energy’s NSUF program provides nuclear energy researchers access to and assistance at these facilities free of charge, with selection determined via a competitive process. While this fossil imaging collaboration was not organized as part of the NSUF initiative, INL researchers are hoping to attract more interest among non-nuclear scientists in using these instruments.

“INL has the only ZEISS X-ray microscope in the Idaho/Montana/Wyoming area, and it can be used for a wide range of applications beyond post-irradiation examination,” said Nikolaus Cordes, an INL instrument scientist. “Providing local researchers access to this microscope will help foster relationships, facilitate cutting-edge research in several areas of science and further INL’s Cultural Resource Management mission.”

INL’s Cultural Resource Management team is charged with integrating cultural resource considerations into project and land use planning and implementation for lab projects and programs. The team includes archaeologists, historians and preservationists who help INL conduct its mission while being mindful of the fragile artifacts, both natural and man-made, that can be found in abundance on INL’s nearly 900 square mile property.

“I first got in touch with INL researchers about three years ago, and it’s been great to work with them,” Aase said. “The images we got will go a long way toward helping us learn about the fossils themselves as well as the sediment they were found in.”

Aase also plans to use the images to create 3D rotatable exhibits for visitors at Fossil Butte National Monument.

INL is America’s premier nuclear power research institution, and as work toward a net-zero future continues, the laboratory is also leveraging its world-class expertise and instruments to better understand the enigmatic – but not unknowable – past.”