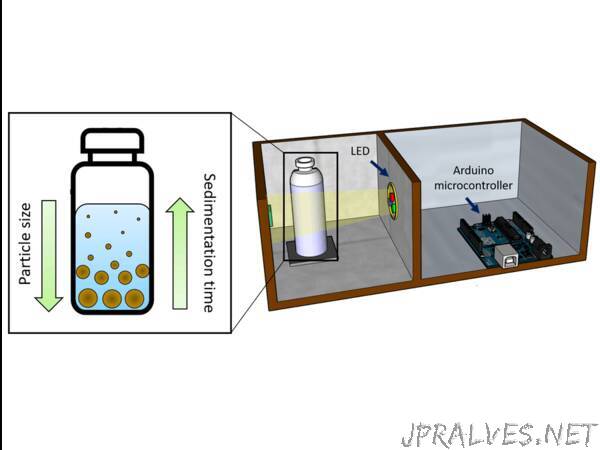 “We developed a simple, low-cost equipment for the study of soil chemistry and morphology using an arduino microcontroller.

Soil is a highly complex environment, where a wide range of different processes that can influence the growth of plants take place. These processes are driven by the physical and chemical properties of the soil particles, and can be a consequence of multiple environmental factors. Thus, the characterisation of soil is often complicated, involving expensive and specialised equipment.

We developed a simple and low-cost device for the physical and chemical characterisation of soil, that could help in the selection of an appropriate substrate. Among all the different factors that can have an impact on the growth of plants, we decided to focus on 3 different properties; Particle size, soil composition and presence of organic matter, and base saturation. Whilst the particle size can be related with the compaction, which can hinder the growth of roots, the presence of carbon, and the base saturation of soil influences the availability of nutrients on the plants. Thus, these measurements could offer a complete for the assessment of soil samples.

Equipment design
For the measurement of soil particle size, we designed a system for the determination of the sedimentation time. This value represents the speed at which the particles in a solution settle due to gravity. As such, it is dependent on the density and radius of the particles. For the measurement of this speed, we employed a tcs34725 colour sensor and a RGB LED, and the sedimentation time was measured on water. The tcs34725 sensor was placed 1 cm below the water level, and both devices were connected to an arduino microcontroller for the data acquisition as shown below. Within this system, the light intensity produced by the LED was measured by the colour sensor after having travelled through a transparent bottle containing the soil sample suspended in water. Since the soil samples are not transparent, the amount of light that could travel through the bottle was dependent on the amount of soil particles suspended in the solution. As such, the proportion of particles in the solution could be correlated with the measured light intensity.

The whole system was contained within a standard cardboard box to block light interferences from the environment. To make a portable system, easy to transport, we included the sensing devices and the microcontroller within the same box, and separated both using an opaque methacrylate sheet as shown below. Both the colour sensor and the LED were connected to the arduino microcontroller for a better control of the experimental conditions, and the white light was produced by using the three RGB LEDs contained within the light source.

To allow a good positioning of the sample container, and reduce the amount of light interferences from the environment, we placed a hole on the cardboard box, and attached a small box onto this space. The hole had the exact size of the bottles to limit the movement of the bottle, and the small box covered the transparent sections.

We also added a hole to the lid of the bottle, which allowed us to connect a tube and the necessary electronics for the measurement of the base saturation of the samples. This parameter was measured using a simple resistance meter and a peristaltic pump connected to a saturated solution of NaCl in water. Since the electrical resistance of a solution decreases when the concentration of ions increase, the concentration of NaCl in the water used for the sedimentation experiment could be indirectly evaluated. To determine the maximum amount of ions that the soil particles can adsorb, the water sample used for the sedimentation experiment was spiked with a saturated solution of NaCl using a peristaltic pump as shown below.

The peristaltic pump was controlled by using a MOSFET Driver Module, which was connected to a 12V power supply. This module allowed us to switch on and off the pump using the arduino microcontroller. In addition, the volume delivered by this pump as a function of the time was calibrated, which allowed us to quantify the volume of the saturated NaCl solution employed.

The electrical resistance of the solution was measured using 2 metal electrodes, separated by 1 cm, and using a 200 kOhm resistance as the reference. This reference could be used to estimate the actual resistance on the solution by measuring the obtained potential through one of the analog pins. A representation of the resistance meter is provided below.”