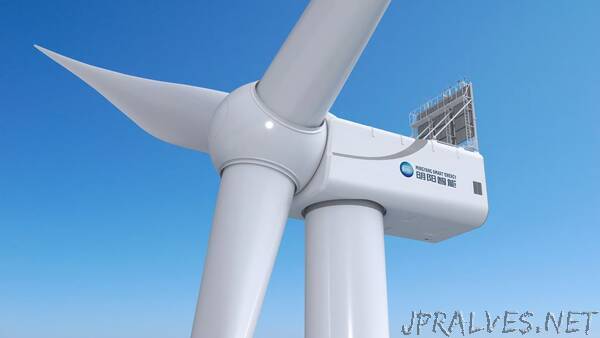 Mingyang Smart Energy set out its stall to take China’s offshore wind industry to a new level of ultra-large turbines with its latest 140-metre-blade MySE 18.X-28X to “move beyond the 18MW threshold”.

The giant machine, unveiled by the Chinese OEM today (Friday), boasts a rotor diameter above 280 metres and 66,000m2 swept area, said Mingyang as it joined compatriot CSSC Haizhuang at the 18MW mark and suggested there is more to come.

The manufacturer claimed at an average 8.5 metres/second the turbine will generate 80GWh annually, enough to supply almost 100,000 people, in the latest in a seemingly endless string of announcements from China’s wind industry seeking to push the boundaries of technology in the sector.

“When compared to the installation of 13MW models, the higher output of the MySE18.X-28X would save 18 units required for a 1GW wind farm, shaving off construction costs by $120,000-150,000 per megawatt,” it said, adding that the turbine would be able to cope with extreme conditions such as a level-17 typhoons with 56 metre/second wind speeds.

There was no indication of production timelines or other details of commercial introduction plans in a brief statement announcing the launch on social media.

Mingyang’s 140-metre blades compare to the 128-metre components on CSSC’s turbine and the 115.5-metre ones on Vestas’ 15MW flagship.

Some in the global offshore wind industry have suggested that continual ramping up in scale of turbines is presenting logistical challenges for the supply chain and a pause is needed.

But the latest Mingyang launch confirms hints reported by Recharge last year by the ambitious OEM that it saw no reason to pause the scale-up in offshore wind turbines.

Mingyang’s European chief told an industry event there is “clear demand” for even larger turbines than the 118-metre-blade 16MW model that was until now its largest on the blocks.

The company has already made inroads into the European market with turbines in place off Italy and a plan to deploy machines at a pioneering UK floating project.”