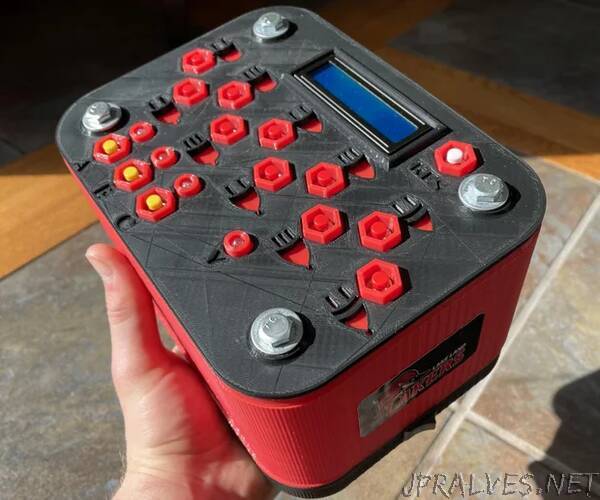 “This Digital Logic Gate Game was my final submission for the STEM Projects / EET-066 class I took at Lake Land College (LLC | Mattoon, IL) in the Spring of 2022; I called it “Name! That! Gate!”

Industrial Computer Programming was the primary focus of my Applied Engineering (AAS.MECH) studies at LLC and, in the last semester working towards that for my STEM Projects class, I wanted to create something that focused on Digital Logic (heavily emphasized in AAS.MECH at LLC) and also included as much of everything else I learned along the way: electrical circuitry & wiring, schematic drafting, microcontroller programming, and 3D modeling & printing.

“Name! That! Gate!” is built around the Raspberry Pi / RasPi Pico microcontroller and, as also stated in the included “userManual_nameThatGate” .pdf file which goes into further detail, it’s a Logic Gate Game that tests player knowledge of Digital Logic Gates themselves. The objective is to determine what Digital Logic Gate is being used to create the state of an Output (Y) given the condition of the Inputs (A), (B), and/or (C) which are able to be toggled. There are x10 Digital Logic Gates to choose from - 2-Input: AND, NAND, NOR, OR, XOR, XNOR; 3-Input: AND, NAND, OR, NOR - and the representative Logic Levels are indicated by LEDs with either Red (low, off, 0) or Green (high, on, 1) lights. The Logic Gate Game goes through x10 stages where a random Logic Gate is loaded for each level, no same Logic Gate is encountered twice during a game cycle from Stage 1 - 10, Inputs ALWAYS start low at each stage, and you can either make a Logic Gate selection with the corresponding button or toggle an Input to see what effect it might have on the Output before you make your choice. Once a Logic Gate is selected, that stage ends and you move to the next. You start with 140pts possible at the beginning (Stage 1) but each input toggle costs 1pt and you’re either rewarded all possible / remaining stage points (14pts p/ stage) if you select the correct Logic Gate or you lose all possible stage points if you make an incorrect Logic Gate selection. After all 10 stages, the Logic Gate Game ends & you’re “graded” by your remaining points - oh, and there’s fun “flavor text” per each grade bracket that’s representative of respective LLC instructors who are a huge part of my success. :)

This STEM Project of mine was the product of my cumulative course studies at LLC and, as originally intended, was donated back to the Technology Division after completion; so, there’s much about this Digital Logic Gate Game & Instructables project as a whole that assumes the knowledge regarding Logic Gates, and everything else contained, possessed by a user & potential builder is at least at the novice or intermediate level. I say this because I know I could have approached creating it differently to cater to beginning levels & documented things better primarily for a step-by-step build, but neither were a part of the initial goal and I was also very busy with other courses & significant life events at the time.”