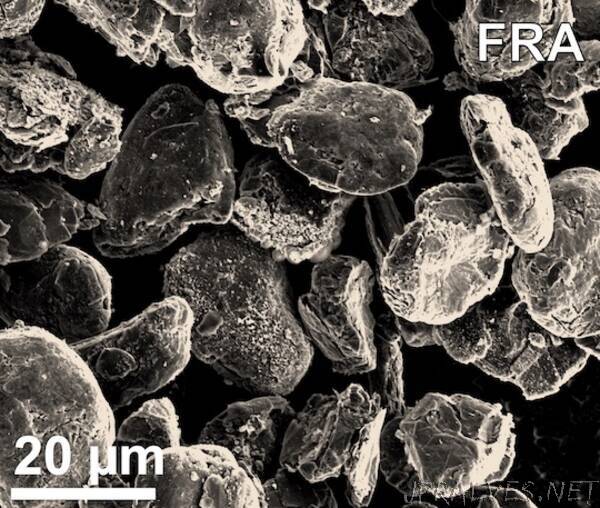 “Fast ‘green’ process revives essential battery components for reuse
How many rechargeable lithium-ion batteries are you wearing? How many are in your general vicinity?

Probably more than a few, and they’re great for powering all the things important to modern lives: cellphones, watches, computers, cars and so much more.

But where they go when they fail is a growing problem. Rice University scientists believe they have a partial solution that relies on the unique “flash” Joule heating process they developed to produce graphene from waste.

The Rice lab of chemist James Tour has reconfigured the process to quickly regenerate graphite anode materials found in lithium-ion batteries, removing impurities so they can be used again and again.

Flashing powdered anodes from commercial batteries recycles some of what the researchers called the “staggering” accumulation of waste they currently leave behind. In just a few seconds, a jolt of high energy decomposes inorganic salts including lithium, cobalt, nickel and manganese from an anode. These can be recovered by processing them with dilute hydrochloric acid.

“The production of lithium-ion batteries in 2026 is expected to be five times what it was in 2017, and right now, less than 5% of them are recycled,” said Tour, who introduced the flash process for graphene in 2020. “That puts a heavy load on the environment, as these spent batteries are processed and the anodes burned for energy or sent for landfills.

“We’re claiming our process can recover critical metals and recondition anodes in a far more environmentally and economically friendly manner,” he continued.

The lab reported that flashing anodes degrades the solid-electrolyte interphase (SEI), which conducts lithium ions but also insulates the anode from detrimental reactions.

Flashing then coats the remaining graphite particles with an ion-permeable carbon shell that contributes to their future capacity, rate performance and cycling stability compared to materials conventionally recycled in a time-consuming and energy-intensive process known as high-temperature calcination.

The lab estimated it would cost about $118 to recycle one ton of untreated anode waste. They demonstrated that flash-recycled anodes have a recovered specific capacity of 351 milliAmp hours per gram at 32 degrees Fahrenheit, superior to the rate performance and electrochemical stability of untreated or calcinated recycled anodes.

The recycled, flashed anodes the researchers tested retained more than 77% of their capacity after 400 recharge cycles.

“Beyond the spent graphite anodes, we are confident that the cathodes, the electrolytes and their mixtures can be effectively recycled or reconditioned by our method,” said Rice graduate student Weiyin Chen, lead author of the study.

Tour is the T.T. and W.F. Chao Chair in Chemistry and a professor of materials science and nanoengineering.