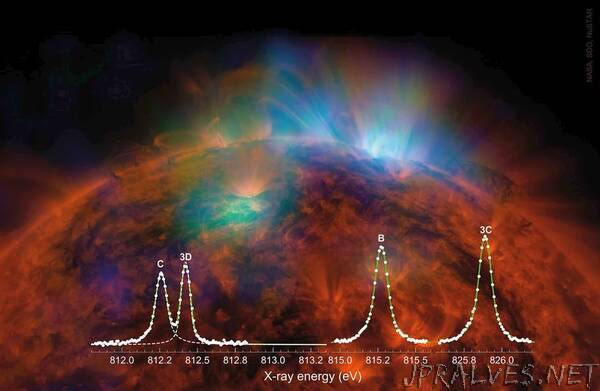 Very hot gas, as found in the sun’s corona or in close proximity to black holes, emits very intense x-rays. It reveals the locally prevailing physical conditions, such as temperature and density. But there is one problem that researchers have been battling with for decades: the intensity rates of important emission lines of iron measured in the laboratory do not match those calculated. This causes ambiguity over the magnitude of the gas derived from the x-ray spectra. An international team under the leadership of the Max Planck Institute for Nuclear Physics in Heidelberg has now solved the problem using an exceptionally accurate experiment: theory and experiment finally concur. In future, this will allow x-ray data from deep-space telescopes to be analysed in the underlying atomic models with a high degree of reliability.

Virtually everything that we know about distant stars, gas nebula and galaxies is based on the analysis of light that we receive from them. More precisely, the electromagnetic waves, as their entire spectrum is now available to astronomers. It is largely the temperature of a mass or a gas which determines in which spectral range it glows particularly brightly: the hotter, the higher the energy of the radiation. In space, more than 99 per cent of all the visible material is in a plasma state; it is so hot that the atoms have lost one or more electrons and are present as positively charged ions. Extremely hot plasma with temperatures of more than a million degrees are found in the corona of the sun seen during a total solar eclipse. They are also found in the vicinity of black holes or as intergalactic gas between the galaxies.

The x-rays emitted by such plasma exhibits the DNA of the chemical elements found within it. Emission lines of multiple ionised iron are very prominent, in particular Fe XVII, which has lost 16 of its 26 electrons. The reason: Iron is commonly represented among the heavy elements, and Fe XVII is represented over a wide temperature range.

When analysing an x-ray spectrum, in addition to comparing the energy of the emission lines, the intensity ratios of the characteristic lines are also compared. To deduce the properties of the cosmic plasma from this, one needs to know the intensity ratios well. This is possible by theoretically calculating them and checking them in the laboratory. And it is precisely this which has been the problem to date: quantum mechanic calculations and laboratory results of the intensity ratio of two strong lines named 3C and 3D deviated from one another by around 20 per cent. This threw into question our understanding of atomic structure and confidence in the utilised models.

This was a problem not only for the astronomers, but also for the physicists, because where was the mistake? In the theory or in the experiment? Two years ago, the team under doctoral researcher Steffen Kühn from the Heidelberg-based Max Planck Institute for Nuclear Physics (MPIK), performed the most accurate experiment to date and, even then, there remained an unexplained discrepancy. The MPIK theory team under Natalia Oreshkina and Zoltan Harman, as well as Marianna Safronova and Charles Cheung in the USA and Julian Berengut in Australia let supercomputers run at full pelt to recalculate the 3C and 3D emission lines of Fe XVII with the highest accuracy. The discrepancy remained, as did the problems: who was right?

“At the time, we were convinced that we had a handle on all known systematic effects in the measurement,” Kühn remembers. But in a final attempt, he and the research team, headed by José Crespo, wanted to get to the bottom of the problem: instead of measuring intensity ratios of the two lines, they tried to measure the absolute intensity of the individual transitions, also known as oscillator strength. But, to measure the individual line strengths and to identify the “culprits” of the two lines from the theoretical point of view, the quality of the measurement data had to be improved considerably.

For this tricky measurement, Kühn used an electron beam ion trap device (PolarX-EBIT) which was built as part of a project by postdoc Sonja Bernitt at MPIK. In it, iron ions are produced by an electron beam and captured in a magnetic field. Consequently, the electron beam removes the outer electrons of the iron ions until the desired Fe XVII is produced. The captured iron ions are then irradiated with x-rays of a suitable energy level so that they glow. To do this, the irradiated energy of the x-ray photons must be varied until the sought-after lines are precisely hit. Since conventional devices are unable to produce the required x-rays, the PolarX-EBIT had to be transported to the DESY in Hamburg. There, the synchrotron PETRA III generates an x-ray beam, whose energy can be tuned over a certain energy range. In this way, it triggers the iron ions to emit x-rays which can then be subjected to spectral analysis.

Over long days and short nights, and with wily improvements to the devices and the measurement scheme, Kühn and his colleagues Moto Togawa, René Steinbrügge and Chintan Shah succeeded in re-doubling the release of the spectra compared to their previous measurement and in suppressing the background interference, which appeared with every measurement, by a factor of a thousand. The hugely improved data quality brought about the breakthrough: first, the emission lines being researched could be fully separated from neighbouring lines. The 3C and 3D lines could now also be measured up to the outer limits. “In the previous measurements, the flanks of these lines were hidden in the background, which led to an erroneous interpretation of the intensities,” explains Kühn. Maurice Leutenegger from the NASA Goddard Space Flight Center, who was involved in the experiment as an expert in x-ray astrophysics, is highly satisfied with this: the final outcome now chimes beautifully with the theoretical forecasts. This also makes the theorists happy.

“This increases confidence in the quantum mechanic calculations which are used to analyse astrophysical spectra. This applies particularly for lines for which there are no experimental reference values,” says Kühn, explaining the significance of the new outcome. And the spectra of the deep-space telescopes can now be evaluated with a higher degree of accuracy. This also applies to two large x-ray observatories which are soon to be sent into space: the X-Ray Imaging Spectroscopy Mission (XRISM, launching in May 2023) under Japanese leadership, and the Athena X-Ray Observatory of the European Space Agency ESA (launching in the early 2030s).”