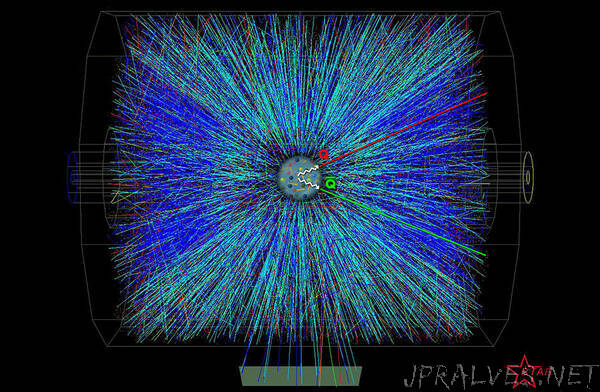 Scientists at the U.S. Department of Energy’s (DOE) Brookhaven National Laboratory will participate in a new Topical Theory Collaboration funded by DOE’s Office of Nuclear Physics to explore the behavior of so-called “heavy flavor” particles. These particles are made of quarks of the “charm” and “bottom” varieties, which are heavier and rarer than the “up” and “down” quarks that make up the protons and neutrons of ordinary atomic nuclei. By understanding how these exotic particles form, evolve, and interact with the medium created during powerful particle collisions, scientists will gain a deeper understanding of a unique form of matter known as a quark-gluon plasma (QGP) that filled the early universe.

These experiments take place at the Relativistic Heavy Ion Collider (RHIC) at Brookhaven Lab and the Large Hadron Collider (LHC) at Europe’s CERN laboratory. Scientists accelerate and smash together the nuclei of heavy atoms at energies high enough to set free the quarks and gluelike “gluons” that hold ordinary matter together. These collisions create a soup of quarks and gluons much like the matter that existed just after the Big Bang, some 14 billion years ago.

A powerful theory, known as quantum chromodynamics (QCD), describes very accurately how the plasma’s quarks and gluons interact. But understanding how those fundamental interactions lead to the complex characteristics of the plasma—a trillion-degree, dense medium that flows like a fluid with no resistance—remains a great challenge in modern research.

The Heavy-Flavor Theory (HEFTY) for QCD Matter Topical Theory Collaboration, which will be led by Ralf Rapp from Texas A&M University, seeks to close that gap in understanding by developing a rigorous and comprehensive theoretical framework for describing how heavy-flavor particles interact with the QGP.

“With a heavy-flavor framework in place, experiments tracking these particles can be used to precisely probe the plasma’s properties,” said Peter Petreczky, a theorist at Brookhaven Lab, who will serve as co-spokesperson for the collaboration along with Ramona Vogt from DOE’s Lawrence Livermore National Laboratory. “Our framework will also provide a foundation for using heavy-flavor particles as a probe at the future Electron-Ion Collider (EIC). Future experiments at the EIC will probe different forms of cold nuclear matter which are the precursors of the QGP in the laboratory,” Petreczky said.

In heavy ion collisions at RHIC and the LHC, heavy charm and bottom quarks are produced upon initial impact of the colliding nuclei. Their large masses cause a diffusive motion that can serve as a marker of the interactions in the QGP, including the fundamental process of quarks binding together to form composite particles called hadrons.

“The framework needs to describe these particles from their initial production when the nuclei first collide, through their subsequent diffusion through the QGP and hadroniziation,” Petreczky said. “And these descriptions need to be embedded into realistic numerical simulations that enable quantitative comparisons to experimental data.”

Swagato Mukherjee of Brookhaven Lab will be a co-principal investigator in the collaboration, responsible for lattice QCD computations. These calculations require some of the world’s most powerful supercomputers to handle the complex array of variables involved in quark-gluon interactions.

“Recently there has been significant progress in lattice QCD calculations related to heavy flavor probes of QGP,” Mukherjee said. “We are in an exciting time when the exascale computing facilities and the support provided by the topical collaboration will enable us to perform realistic calculations of the key quantities needed for theoretical interpretation of experimental results on heavy flavor probes.”

In addition to lattice QCD the collaboration will use variety of theoretical approaches, including rigorous statistical data analysis to obtain the transport properties of QGP.

“The resulting framework will help us unravel the underlying microscopic processes that drive the properties of the QGP, thereby providing unprecedented insights into the inner workings of nuclear matter based on QCD,” said Rapp of Texas A&M, the principal investigator of the project.

The HEFTY collaboration will receive $2.5 Million from the DOE Office of Science, Office of Nuclear Physics, over five years. That funding will provide partial support for six graduate students and three postdoctoral fellows at 10 institutions, as well as a senior staff position at one of the national laboratories. It will also establish a bridge junior faculty position at Kent State University.