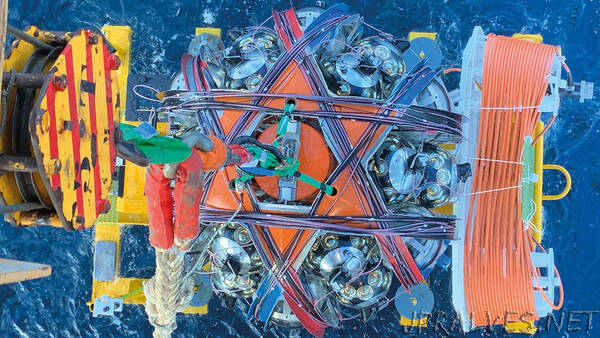 “More than 17,000 photomultipliers for KM3NeT are already transmitting data from the Mediterranean seabed, opening a new vista on the neutrino’s properties. Paschal Coyle, Antoine Kouchner and Gwenhaël De Wasseige take a deep dive.

In the dark abysses of the Mediterranean Sea, what promises to be the world’s largest neutrino telescope, KM3NeT, is rapidly taking shape. Using transparent seawater as the detection medium, its large three-dimensional arrays of photosensors will instrument a volume of more than one cubic kilometre and detect the faint Cherenkov light induced by the passage of charged particles produced in nearby neutrino interactions. The main physics goals of KM3NeT are to detect high-energy cosmic neutrinos and identify their astrophysical origins, as well as to study the fundamental properties of the neutrino itself.

The key technology is the digital optical module (DOM) – a pressure-resistant glass sphere hosting 31 three-inch photomutiplier tubes, various calibration devices and the readout electronics (see “Modular” image). A total of 18 DOMs are hosted on a single detection line, and the lines are anchored to the seafloor and held taut by a submerged buoy. The ORCA detector will comprise around 100 lines and the ARCA detector will have twice as many. The bases of the lines are connected via cables on the seafloor to junction boxes, from which electro-optical cables many tens of kilometres long bring the data to shore along optical fibres. Information on every single photon is transmitted to the shore stations, where trigger algorithms are applied to select interesting events for offline analysis.

From the light pattern recorded by the DOMs, the energy and the direction of a neutrino can be estimated. Furthermore, the neutrino flavour can also be distinguished; muon neutrino charged–current (CC) interactions produce an extended track-like signature (see “Subsea shower” image) whereas electron– and tau–neutrino CC interactions, as well as neutral-current interactions, produce more compact shower-like events. By selecting up-going neutrinos, i.e. those that have travelled from the other side of Earth, the large background from down-going atmospheric muons can be rejected and a clean sample of neutrinos obtained.

The first KM3NeT detection line was connected in 2016 and currently a total of 32 lines are operating at the two sites. The first science results with these partial detectors have already been obtained.

Fundamental neutrino properties
Sixty-six years after their discovery, neutrinos remain the most mysterious of the fermions. As they whiz through the universe, barely interacting with any other particles, they have the unique ability to oscillate between their three different types or flavours (electron, muon and tau). The observation of neutrino oscillations in the late 1990s implies that neutrinos have a non-zero mass, contrary to the Standard Model expectation. Understanding the origin and order of the neutrino masses could therefore unlock a path to new physics. Numerous neutrino experiments around the world are closing in on the neutrino’s properties, using both artificial (accelerator and reactor) and natural (atmospheric and extraterrestrial) neutrino sources.

The KM3NeT/ORCA array is optimised for the detection of atmospheric neutrinos, produced when cosmic rays strike atomic nuclei at an altitude of around 15 km. Such interactions produce a cascade of particles on Earth’s surface, mostly pions and kaons, which decay to neutrinos capable of traversing the entire planet. About two thirds of these are muon neutrinos and antineutrinos, and the remainder are electron neutrinos and antineutrinos.

Measuring the directions and energies of the detected atmospheric neutrinos allows the oscillatory behaviour of neutrinos to be studied, and thus elements of the leptonic “PMNS” mixing matrix to be determined. The measured direction is used as a proxy for the distance the atmospheric neutrino has travelled through Earth between its points of production and detection. First preliminary results with six ORCA lines and one year of data clearly show the expected disappearance of muon neutrinos with increasing baseline/energy. The corresponding constraints on θ23 (the mixing angle between the m2 and m3 states) and Δm232 (the mass difference of the squared masses) already start to be competitive with multi-year results from the current long-baseline accelerator experiments (see “Physics debut” figure).

A 115-line configuration of ORCA operating for three years is expected to provide a three-sigma sensitivity for most θ23 values. KM3NeT could therefore be the first detector to unambiguously determine the neutrino mass ordering, on a time scale in advance of the planned long-baseline accelerator experiments. New-physics scenarios (for example, non-standard interactions, neutrino decays and sterile neutrinos) that modify the oscillation patterns recorded in both ORCA and ARCA have already been explored. While no significant deviations from the Standard Model have been observed, the enhanced sensitivity as the detectors grow will push the existing limits and probe uncharted territories.

Neutrino astronomy
At the beginning of the 1960s, it was realised that the neutrino could play a special role in the study of the universe at large. Weakly interacting with matter and electrically neutral, it enables exploration at greater distances and higher energies than is possible with conventional electromagnetic probes. In addition, neutrinos are the unambiguous smoking gun of hadronic acceleration processes occurring at their source.

Since the observation of a significant flux of cosmic high-energy neutrinos in the TeV–PeV range by the IceCube Neutrino Observatory at the South Pole in 2013, the focus of neutrino astronomers has been to identify the astrophysical origins of these neutrinos. Amongst the diverse possible sources, a multi-messenger approach has identified the first: the flaring blazar TXS0506+056. While other source candidates have appeared, such as tidal disruption events and radio-bright blazars, the currently identified source population(s) cannot fully explain the detected flux. Having a neutrino telescope with a sensitivity similar to that of IceCube and with a complementary field of view allows the full neutrino sky to be continuously monitored. KM3NeT’s location in the Northern Hemisphere provides an optimal view of the galactic plane and makes it the ideal instrument to detect, characterise and resolve sources that may emit galactic neutrinos.

Soon, KM3NeT will start sending alerts to its multi- messenger partners – including conventional electromagnetic telescopes but also other neutrino telescopes such as IceCube and Baikal/GVD – when a neutrino candidate with a high probability of astrophysical origin is detected. This is right on time for the fourth observing run of the LIGO, Virgo and KAGRA gravitational-wave interferometers. While so far no neutrinos have been observed from binary compact systems detected through gravitational waves, a joint detection would reveal unique information on the high-energy processes in the environment of the mergers. Furthermore, the exceptional pointing resolution of KM3NeT would significantly reduce the region of interest where electromagnetic partners should search for a counterpart. The ARCA detector, for example, will benefit from the low optical scattering of deep seawater to reconstruct the direction of muon-neutrino events to less than 0.1 degrees at 100 TeV and around 1 degree for the electron/tau neutrino flavours.

Last but not least, KM3NeT is already waiting for the next close-by core-collapse supernova. Such astrophysical events are rare: the first and only one ever detected in neutrinos, SN1987a, occurred 35 years ago. The KM3NeT DOMs are continuously monitoring for a short-duration increase in counting rates on many DOMs simultaneously – the signature of a flash of MeV supernova neutrinos passing through the detectors – and the detector is networked with other neutrino telescopes via the SuperNova Early Warning System (SNEWS). If a galactic supernova would happen today, the number of neutrinos detected by SNEWS would be four orders of magnitude more than for SN1987a!

Whether the cosmic-neutrino sources are point-like, extended, transient or variable, the KM3NeT collaboration has developed reconstruction techniques, event selections and statistical frameworks to identify them and determine their characteristics. Disentangling the galactic from the extragalactic components, the steady from the transient and the electromagnetically bright from the obscure are on KM3NeT’s to-do list for the coming decade.

Marine science
KM3NeT is important not only for particle physics, but is also a powerful tool for marine sciences. The acquisition of long-term oceanographic data helps researchers understand and eventually mitigate the harmful effects of global processes, such as climate change and anthropogenic impact, as well as study episodic events such as earthquakes, tsunamis, biodiversity changes and pollution – all of which are difficult to study with short-term conventional marine expeditions. To this end, the seafloor infrastructures of first the ANTARES and now the KM3NeT sites are unique cabled marine observatories. They are open to all scientific communities, and as such are important nodes of the European Multidisciplinary Seafloor and water-column Observatory, EMSO.

Sixty-six years after their discovery, neutrinos remain the most mysterious of the fermions

Furthermore, the KM3NeT optical sensors and the acoustics sensors (used for the positioning of the DOMs) themselves provide unique information on deep-sea bioluminescence and bioacoustics. The ANTARES collaboration has several publications studying deep-sea bioluminescence and acoustic detection of cetaceans, and recently KM3NeT invited citizen scientists to analyse its optical and acoustic data via the Zooniverse platform in the context of the EU project REINFORCE.

The KM3NeT detectors will continue to grow in size and sensitivity as additional new lines are installed over the next five years. With three major neutrino telescope facilities now online – Baikal/GVD, IceCube and KM3NeT – neutrino astronomy is truly entering its golden era.”