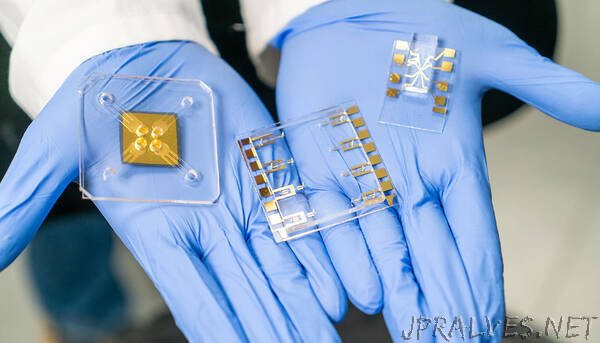 “The ability to analyze the properties of individual cells is vital to broad areas of life science applications, from diagnosing diseases and developing better therapeutics to characterizing pathogenic bacteria and developing cells for bioproduction applications. However, the accurate analysis of individual cells is a challenge, especially when it comes to a cell’s biophysical properties, due to large property variations among cells even in the same cell population as well as the presence of rare cell types within a larger population.

Addressing this need, Dr. Arum Han, Texas Instruments Professor II in the Department of Electrical and Computer Engineering at Texas A&M University, together with his graduate students and postdoctoral researchers, have developed a new technology that can accurately analyze cell properties through the use of a single-cell electrorotation microfluidic device, which utilizes an electric field to probe the cell’s properties.

“By knowing how much force was applied and how fast the cell turns, you can extract many basic biophysical properties of cells,” Han said.

There have been previous efforts to accomplish this, but this technology is the most accurate in measuring these properties because of its capability to apply a high-frequency electric field (up to 100 megahertz) and its use of an eight-electrode-pair design to simultaneously trap a single cell and apply rotational force to the trapped cell.

This technology has been fully developed and applied to several different cell analysis applications. Having successfully demonstrated that analysis can be accurately completed on one cell at a time, Yuwen Li, graduate student in Han’s lab and the lead author of the work, is now leading the effort to further develop the technology so that this can be executed at a much higher speed and against many cells simultaneously.

Other contributors to this research are postdoctoral researcher Can Huang and research scientist Songi Han from the electrical and computer engineering department.