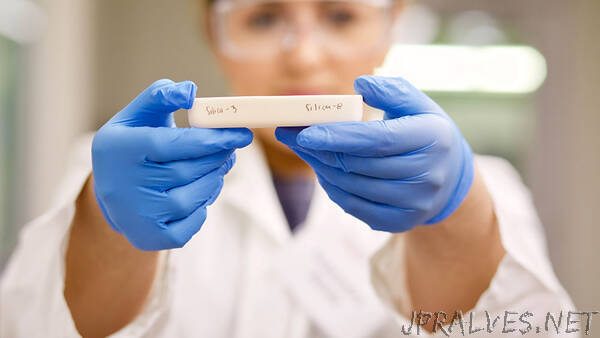 The research was published in the journal Angewandte Chemie.

Most commercial synthetic polymers consist of large molecules that do not break apart under normal conditions. When left in the environment, manufactured items such as foam cups or plastic containers break down into small pieces that are unseen by the naked eye, but the long polymer molecules remain present forever.

“It’s not just the plastic bottle being kicked down the road,” Pentzer said. “These materials break down into microplastics that stay in the environment. We don’t fully understand the impact of microplastics, but they’ve been shown to carry diseases, heavy metals and fecal bacteria.”

To make the degradable polymers, Pentzer collaborated with Dr. Don Darensbourg, distinguished professor in the Department of Chemistry at Texas A&M, to use carbon dioxide and table salt to create the ink that was used in the 3D printing process. After printing, the structures are washed with water to dissolve the salt and solidify the structure. While the outside of the structure continues to look smooth, the process creates thousands of small pores which allow the chemical compounds to degrade at a quicker rate.

“Under the right conditions, the polymers we’ve created will actually degrade quickly,” Pentzer said. “Ideally, they’ll break apart into small molecules that are not toxic. These smaller molecules won’t be able to carry things like heavy metals or bacteria.”

As the research progresses, Pentzer hopes to use this process to create packaging materials so that things like boxes and tape can degrade quickly, rather than sitting in a landfill for years. She also sees a bright future for 3D-printed polymers in the biomedical field.

“These materials can be used for diverse biomedical applications,” Pentzer said. “Things like scaffolds for implants that will degrade over time so your body can heal, but you won’t have that piece of plastic in you forever.”

Through her interdisciplinary research, Pentzer is seeking to solve a worldwide problem that could have implications on the environment, human health, biomedicine and almost every aspect of human existence.

“It’s kind of like marrying the science with the engineering,” Pentzer said. “Working together, we can create synergy and achieve much more.”

This research was supported by grants from the Texas A&M Triads for Transformation Program, the Welch Foundation and the National Science Foundation.”