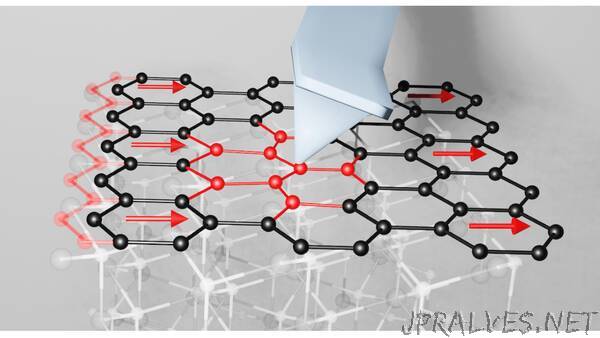 Professor of Chemical and Biomolecular Engineering Elisa Riedo and her team have discovered a fundamental friction law that is leading to a deeper understanding of energy dissipation in friction and the design of two-dimensional materials capable of minimizing energy loss.

Friction is an everyday phenomenon; it allows drivers to stop their cars by breaking and dancers to execute complicated moves on various floor surfaces. It can, however, also be an unwanted effect that drives the waste of large amounts of energy in industrial processes, the transportation sector, and elsewhere. Tribologists — those who study the science of interacting surfaces in relative motion — have estimated that one-quarter of global energy losses are due to friction and wear.

While friction is extremely widespread and relevant in technology, the fundamental laws of friction are still obscure, and only recently have scientists been able to use advances in nanotechnology to understand, for example, the microscopic origin of da Vinci’s law, which holds that frictional forces are proportional to the applied load.

Now, Riedo and her NYU Tandon postdoctoral researcher Martin Rejhon have found a new method to measure the interfacial shear between two atomic layers and discovered that this quantity is inversely related to friction, following a new law.

This work — conducted in collaboration with NYU Tandon graduate student Francesco Lavini, and colleagues from the International School for Advanced Studies, the International Center for Theoretical Physics in Trieste Italy, as well as Prague’s Charles University — could lead to more efficient manufacturing processes, greener vehicles, and a generally more sustainable world.

“The interaction between a single atomic layer of a material and its substrate governs its electronic, mechanical, and chemical properties,” Riedo explains, “so gaining insight into that topic is important, on both fundamental and technological levels, in finding ways to reduce the energy loss caused by friction.”

The researchers studied bulk graphite and epitaxial graphene films grown with different stacking orders and twisting, measuring the hard-to-access interfacial transverse shear modulus of an atomic layer on a substrate. They discovered that the modulus (a measure of the material’s ability to resist shear deformations and remain rigid) is largely controlled by the stacking order and the atomic layer-substrate interaction and demonstrated its importance in controlling and predicting sliding friction in supported two-dimensional materials. Their experiments showed a general reciprocal relationship between friction force per unit contact area and interfacial shear modulus for all the graphite structures they investigated.

Their 2022 paper, “Relation between interfacial shear and friction force in 2D materials” was published online in Nature Nanotechnology and was funded by the U.S. Department of Energy Office of Science and the U.S. Army Research Office.

“Our results can be generalized to other 2D materials as well,” Riedo, who heads NYU Tandon’s PicoForce Lab, asserts. “This presents a way to control atomic sliding friction and other interfacial phenomena, and has potential applications in miniaturized moving devices, the transportation industry, and other realms.”

“Elisa’s work is a great example of NYU Tandon’s commitment to a more sustainable future,” Dean Jelena Kovačević says, “and a testament to the research being done at our newly launched Sustainable Engineering Initiative, which focuses on tackling climate change and environmental contamination through a four-pronged approach we’re calling AMRAd, for Avoidance, Mitigation, Remediation and Adaptation.””