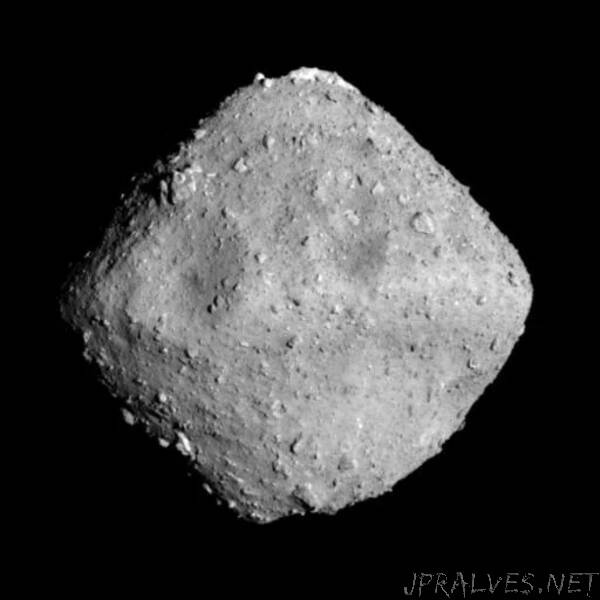 Astronomy Astrophysics Solar System
The asteroid Ryugu likely formed at the outer edge of the Solar System beyond the orbits of Jupiter and Saturn, as high-precision measurements that determine the ratio of iron isotopes in rock samples from Ryugu suggest. The Japanese space probe Hayabusa 2 had taken the samples and brought them back to Earth two years ago. An international group of researchers with participation of the Max Planck Institute for Solar System Research (MPS) in Göttingen and the Georg-August-University Göttingen describes these results in today’s issue of the journal Science Advances. According to their findings, Ryugu’s “list of ingredients” differs significantly from that of typical carbon-rich meteorites in one crucial point. Instead, everything indicates a close kinship to a rare group of meteorites that is likewise associated to the outer Solar System. The study is one of three publications that the journals Science and Science Advances today dedicate to asteroid Ryugu.

The sample capsule that landed near the town of Woomera in South Australia on December 5th, 2020 contained only five grams of rocky material. After having collected these samples from the asteroid Ryugu a year earlier, the Japanese space probe Hayabusa 2 made use of its Earth flyby to deliver this valuable cargo - before traveling on to its next asteroid encounter. In 2031, Hayabusa 2 is scheduled to pass its second target, asteroid 1998 KY26.

The material contained in the capsule are only the second rock samples ever brought back to Earth from an asteroid. Precise measurements that can provide comprehensive information about composition, consistency, origin, and development of the samples’ parent body are only possible in Earth-based laboratories - and not on board the spacecraft. Almost two years after the arrival of the samples on Earth, the first results are available. They confirm, among other things, that the rock samples have a granular, loose structure, a history in which minerals reacted with water over a long period of time, and that Ryugu contains amino acids and other complex organic molecules. One of the many unanswered questions is, however, where in the Solar System Ryugu originated. The current study to which the MPS and the University of Göttingen have contribute addresses this very question.

The carbon-rich asteroid Ryugu, which measures about one kilometer in diameter and whose shape resembles a rounded double pyramid, is a so-called NEO, a near-Earth object. These bodies orbit the Sun at a similar distance as Earth does. Researchers assume, however, that asteroids of this type are in fact newcomers to the inner Solar System and have spent most of their existence in the asteroid belt between the orbits of Mars and Jupiter.

The actual birthplace of many bodies in the asteroid belt is likely to lie even farther away from the Sun. Measurements and simulations suggest that carbon-rich asteroids (as well as carbon-rich meteorites, so-called carbonaceous chondrites) originated in the outer Solar System: most of them near the formation sites of Jupiter and Saturn, a few possibly even near Uranus and Neptune. The subsequent growth of the four giant planets then whirled them into the asteroid belt.

“All studies indicate that Ryugu, like the carbonaceous chondrites, is a child of the outer Solar System,” says Timo Hopp of the University of Chicago, first author of the current study, summarizing what was known so far; the scientist has by now moved to the MPS. However, it had not yet been possible to clarify whether Ryugu originated near Jupiter and Saturn or even further away from the Sun.

To this end, Hopp’s research group turned to the isotopes of iron in the asteroid’s samples. Isotopes are variants of the same chemical element, such as iron, that differ only in the number of neutrons in the nucleus and thus in their weight. Scientists assume that the isotopes of certain elements were not evenly distributed at the birth of the Solar System. Depending on where a body was formed, building material with different isotope ratios was thus available. Even today, these ratios therefore still contain information about the place of origin of a planetary body.

For their analyses, the researchers examined four samples of the asteroid Ryugu and, for comparison, samples of 13 different meteorites representing different meteorite groups. Most of them, like Ryugu, are carbon-rich. “The ratio of certain iron isotopes is an excellent marker to distinguish some of these groups from each other by their places of origin,” explains MPS director and co-author Thorsten Kleine.

After the rock samples from Ryugu were elaborately chemically prepared in Japan, they traveled to Chicago. After further preparatory steps, Timo Hopp analyzed the samples using a multicollector plasma mass spectrometer and was able to determine differences in the ratios of various iron isotopes to within a few parts per million.

As it turned out, in the case of asteroid Ryugu these ratios differ significantly from that of most of the studied meteorites – with the exception of only one group: the CI chondrites, also known as Ivuna-type meteorites. They are named after the site in Tanzania, where the best-known representative of this group was found. “There is a striking relationship between the asteroid Ryugu and the comparatively rare meteorites of the CI group,” Hopp says. “Our measurements demonstrate that Ryugu and Ivuna-type meteorites formed in the same region of the early Solar System, and that this region does not coincide with the formation site of other carbonaceous chondrites,” he adds.

“All in all, there is much to suggest that with Ryugu and the Ivuna-type meteorites we have found remnants of early planetary bodies that formed at the very edge of the Solar System,” says co-author Prof. Dr. Andreas Pack of the Department of Geochemistry and Isotope Geology at Georg-August-Universität Göttingen.

Previous studies had already found similarities between the asteroid Ryugu and Ivuna-type meteorites, for example with regard to their chemical and mineralogical composition. Today, a group of researchers reports of more evidence of this close kinship in the journal Science: The gases that the samples from Ryugu exhaled during their journey to Earth in the sample capsule also point to similarities with these exotic meteorites.”