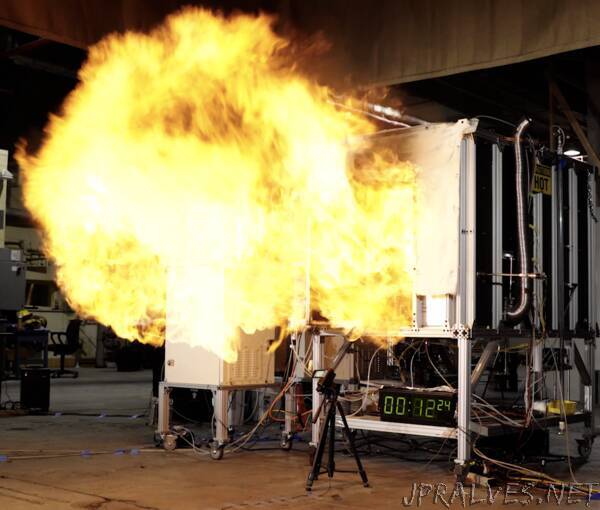 “A lack of oxygen can reduce even the most furious flame to smoldering ash. But when fresh air rushes in, say after a firefighter opens a window or door to a room, the blaze may be suddenly and violently resurrected. This explosive phenomenon, called backdraft, can be lethal and has been challenging for firefighters to anticipate.

Now, researchers at the National Institute of Standards and Technology (NIST) have hatched a plan for informing firefighters of what dangers lie behind closed doors. The team obtained data from hundreds of backdrafts in the lab to use as a basis for a model that can predict backdrafts. The results of a new study, described at the 2022 Suppression, Detection and Signaling Research and Applications Conference, suggest that the model offers a viable solution to make predictions based on particular measurements. In the future, the team seeks to implement the technology into small-scale devices that firefighters could deploy in the field to avoid or adapt to dangerous conditions.

Currently, firefighters look for visual indicators of a potential backdraft, including soot-stained windows, smoke puffing through small openings and the absence of flames. If the cues are present, they may vent the room by creating holes in its ceiling to reduce their risk. If not, they may charge right in. Ultimately, first responders must rely on their eyes in a hazy environment to guess the correct action. And guessing wrong could come at a steep cost.

“If you can take measurements at the scene and reliably know the likelihood of a backdraft, you can open a door without taking as much of a risk. Or you can be more confident that you need to cool down the compartment before entering, either by venting or hosing down the space through small openings,” said NIST engineer Ryan Falkenstein-Smith.

At NIST’s National Fire Research Laboratory, Falkenstein-Smith and colleagues conducted experiments where they lit a stream of gaseous fuel that poured into a small chamber and then sealed its door shut. In each case, the door remained closed for several minutes as the researchers continued to pump gas into the chamber and the fire burnt itself out by depleting its available oxygen.

Then, from a safe distance, they remotely sprung open the door. Some experiments were rather uneventful, with no hint of reignition. In others, fireballs, accompanied by pressure waves, erupted in the doorway, Falkenstein-Smith said.

Throughout nearly 500 experiments, in which the researchers altered factors such as the type and amount of gas injected into the chamber, they took measurements that ran the gamut. They recorded temperatures, pressures, the dimensions of the fireballs and more. To determine the abundance of the fuel in particular, they improved upon an instrument developed at NIST decades prior called a phi meter.

The meter sampled fuel and air gas mixtures from the chamber, added a known amount of oxygen and then combusted the sample internally, measuring the difference in oxygen before and after. The less oxygen consumed in the reaction, the greater the relative abundance of fuel in the mixture.

“We aimed to capture all these different components that create the conducive conditions for a backdraft,” Falkenstein-Smith said.

The team analyzed the measurements and picked up on certain trends. Fuel pouring into the chamber at higher rates coincided with a higher likelihood of backdrafts, for instance. To get more out of the data, the researchers also used a machine learning algorithm to establish a predictive backdraft model from their treasure trove of information.

As an initial trial for the model, they fed it readings of gas concentrations, fuel richness and temperature taken at a single location in the chamber before the door opened during their experiments. Based on that information alone, the model had to estimate the chance of a backdraft occurring.

Taking an estimate of above 50% as an affirmative prediction and below 50% as a negative, the model was correct in 70.8% of the experiments it was tested on. And the accuracy increased to 82.4% with the addition of measurements taken at a second location in the chamber.

The team is confident in its technique and aims to keep the ball rolling, improving the performance and practicality of the technology, Falkenstein-Smith said.

The next steps are to develop a portable device that houses the measurement technology they used in the lab as well as their computer model and then battle-test the technology in a more realistic building fire scenario. The team envisions that firefighters using the handheld device would either probe the air of a room through existing openings, such as cracks around a door, or create small openings.

With further development, the new approach could keep firefighters safe and make saving lives less of a risky business. “