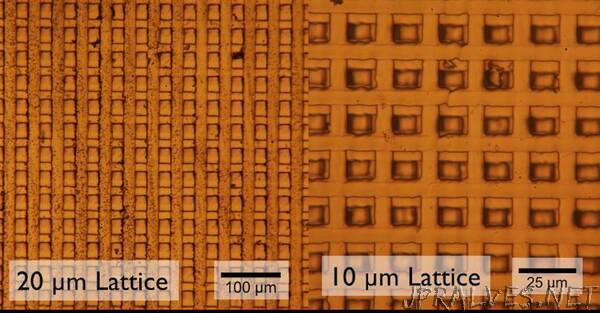 “Applications in tissue scaffolds for artificial organs, and functional devices

The University of Amsterdam has reached a license agreement with the Gouda-based company atum3D on a method for fast, large-scale 3D-printing with sub-micron resolution. The method, developed at the university’s Van ‘t Hoff Institute for Molecular Sciences, combines photo- and stereo-lithography to produce high-resolution features at scale. Potential applications include tissue scaffolds for regenerative medicine, and devices for microfluidics and chromatography.

When it comes to 3D-printing of large objects, current methods in general offer either high resolutions or high speed printing. The method now licensed to atum3D combines the two features in such a way that it offers opportunities in many areas ranging from tissue scaffolds to components for microfluidics and optics. It was invented by Dr Suhas Nawada, at the time a post-doctoral researcher at the Van ‘t Hoff Institute for Molecular Sciences. A patent was applied for in cooperation with the university’s technology transfer office, Amsterdam Innovation Exchange (IXA).

From regenerative medicine to metamaterials and analytical devices
Dubbed ‘hybrid stereolithography’, the method allows high resolution 3D printing with substantial sample dimensions within an acceptable production time. This enables the production of functional parts in high-value applications such as regenerative medicine, where organ-scale parts could be printed with sub-cellular resolution at a time-scale relevant to surgical procedures.

As an example, a cell scaffold was printed for a multi-centimetre blood vessel junction featuring pores of 50 μm, which is a relevant length scale for the growth of endothelial cells. Tristram Budel, the CTO and founder of atum3D, is already looking beyond these first results. He envisions printing a full-sized heart scaffold featuring a controlled porous structure, which would take less than a day to produce. A kidney would take just a quarter of the time. According to Budel, “thanks to the scalability of the technology, building a production facility that can reliably and controllably produce organ scaffolds becomes a real possibility”. He adds the caveat that a printed organ scaffold is not yet a living organ, and a lot more work and research is needed before an actual implantable organ would be produced. “But I think this definitely is an example that puts this 3D printing technology in perspective.”

A game-changing platform
Another pilot example of the novel technology is the production of a microfluidic device with 200 μm channels and 20 μm restrictions. These are used to contain and localize chromatographic stationary phase particles, thus opening up new possibilities in the field of 3D-printed analytical devices. Other end-use sectors include mechanical metamaterials, semiconductors and porous columns for reactions and separations. Budel foresees a new breed of additive manufacturing machines: “We think that combining our current DLP technology with this new technology results in a game-changing platform. It brings possibilities that the market has never seen before: combining large decimetre scale printing with micron size features and all that in just a couple of hours.” He adds that atum3D is already building an application, working with the first customers for the new technology. “In fact, here we come full circle as we develop this application together with the researchers at the UvA.””