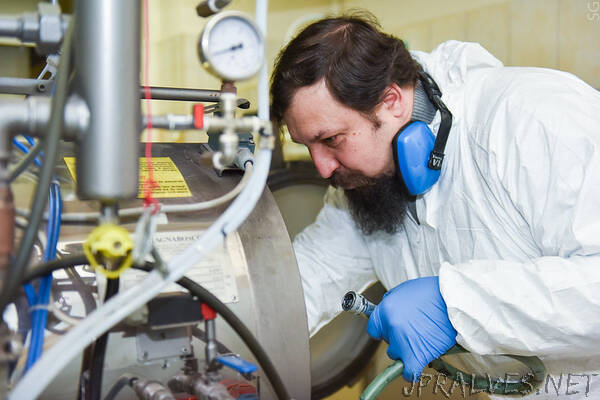 “Russian scientists have proposed a technology for a lightweight and durable composite material creation. It is based on a polymer matrix and carbon fibers. Such material can be used in aircraft construction to create elements of a power set and hull structures. The developed composite can be easily recycled or disposed of, which makes it more environmentally friendly than its analogues. The study has been published in Polymers.

Carbon fiber is a unique material consisting almost entirely of carbon atoms. Its high mechanical strength at low weight, resistance to high temperatures and excellent corrosion resistance ensured its wide application in such high-tech industries as rocketry, aviation, construction, and medicine. Carbon fiber reinforced composite materials are particularly in demand in the aircraft industry. Parts and structures made of them reduce the final weight of the aircraft, and therefore fuel consumption, thereby reducing the cost of the aircraft operation and environmental impact. However, most of today’s carbon fiber composites are based on epoxy resin and other non-melting, insoluble materials that are not recyclable.

Scientists from MISIS University have created a new composite material based on engineering thermoplastic polymers and carbon fiber, which effectively retains its performance properties in aggressive environments, such as aviation fuel, while being easily recyclable.

As a reinforcing material, the Russian-made carbon fiber has been used. For the first time, polyethersulfone powder was used for the matrix production instead of the conventional epoxy resin. It is an amorphous thermoplastic polymer with excellent mechanical properties and resistant to high temperatures, steam and various chemicals. It is also important that polyethersulfone is recyclable, unlike epoxy.

MISIS University researchers have selected the best conditions for obtaining a composite material and determined that the optimal content of carbon fibers for airborne composites based on polyethersulfone is 60-70 percent of the total weight of the structure.

The surface of the carbon fiber was further modified by thermal oxidation, whereby a thin layer comprising a large number of oxygen-containing functional groups was formed on the surface of the carbon filaments. It facilitates better adhesion of the carbon fiber to the polymer matrix. To impregnate the carbon preform, instead of the traditional high-pressure impregnation of the polymer melt, a solution technology was used — the polyethersulfone powder was first dissolved with an organic solvent at room temperature, after which the modified carbon fiber was impregnated with the resulting solution. The test samples were then being dried at 100°C for four hours, and the preform was then placed in a mold where the workpieces were being formed under pressure at 350°C for 30 minutes.

As a result, researchers achieved a stable structure of the obtained composite and significantly improved its mechanical properties and resistance to high temperatures. At the same time, as noted by the authors of the study, the proposed composites creation technology based on polyethersulfone and carbon fibers allows adjusting the properties of the final material depending on the degree of filling the polymer matrix with fibers.”