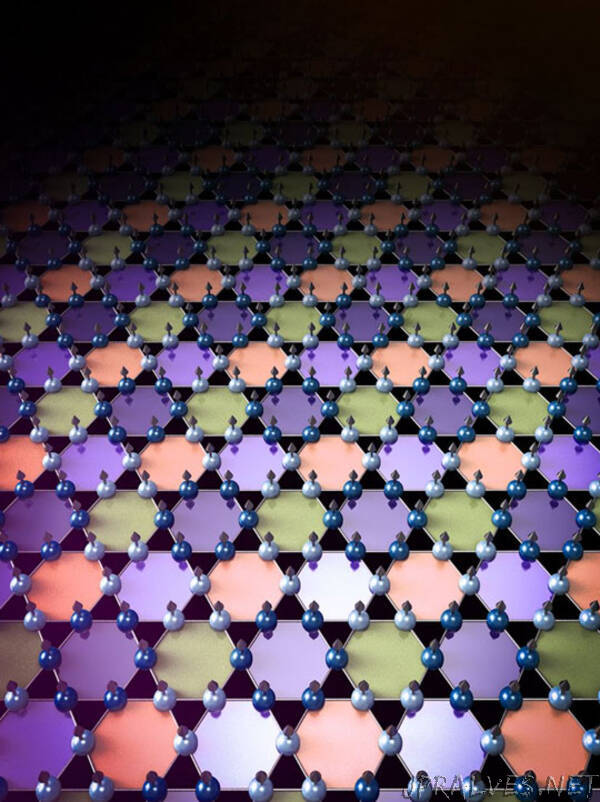 Physicists have discovered a material in which atoms are arranged in a way that so frustrates the movement of electrons that they engage in a collective dance where their electronic and magnetic natures appear to both compete and cooperate in unexpected ways.

Led by Rice University physicists, the research was published online today in Nature. In experiments at Rice, Oak Ridge National Laboratory (ORNL), SLAC National Accelerator Laboratory, Lawrence Berkeley National Laboratory (LBNL), the University of Washington (UW), Princeton University and the University of California, Berkeley, researchers studied pure iron-germanium crystals and discovered standing waves of fluid electrons appeared spontaneously within the crystals when they were cooled to a critically low temperature. Intriguingly, the charge density waves arose while the material was in a magnetic state, to which it had transitioned at a higher temperature.

“Usually, the charge density wave occurs concurrently with magnetism or at a higher temperature than the magnetic transition,” he said. “This particular case appears to be special, because the charge density wave actually occurs at a temperature much lower than magnetism. We do not know of any other example where this actually happens in a material like this one, which features a kagome lattice. That suggests that it could be related to the magnetism.”

The iron-germanium crystals used in the experiments were grown in Dai’s lab and feature a distinct arrangement of atoms in their crystal lattice that is reminiscent of the patterns found in Japanese kagome baskets. Equilateral triangles in the lattice force electrons to interact, and because they loathe to be near one another, this forcing frustrates their movements. The forcing increases as temperatures drop, giving rise to collective behaviors like the charge density wave.

Study co-corresponding author Ming Yi, also of Rice, said, “The charge density wave is like waves forming on the surface of the ocean. It only forms when the conditions are right. In this case, we observed it when a unique feature in the shape of a saddle appeared in the quantum states that the electrons are allowed to live in. The connection with magnetic order is that this charge density wave only occurs when magnetism makes the saddle appear. That is our hypothesis.”

The experiments offer a tantalizing glimpse of the properties physicists will find in quantum materials that have both topological features and those arising from strongly correlated electron interactions.

In topological materials, patterns of quantum entanglement produce “protected” states that cannot be erased. The immutable nature of topological states is of increasing interest for quantum computing and spintronics. The earliest topological materials were non-conducting insulators whose protected states allowed them to conduct electricity in limited ways, like on 2D outer surfaces or along 1D edges.

“In the past, topological materials were types that were very weakly correlated,” said Yi, an assistant professor of physics and astronomy at Rice. “People used those materials to really understand the topology of quantum materials, but the challenge now is to find materials where we can take advantage of both topological states and strong electron correlations.”

In strongly correlated materials, the interactions of billions upon billions of electrons give rise to collective behaviors like unconventional superconductivity or the continual fluctuations between magnetic states in quantum spin liquids.

“For weakly correlated materials like the original topological insulators, first principle calculations work really well,” Yi said. “Just based on how the atoms are arranged, you can calculate what kind of band structure to expect. There’s a really good pathway from a materials design perspective. You can even predict the topology of the materials.

“But strongly correlated materials are more challenging,” she said. “There’s a lack of connection between theory and measurement. So, not only is it difficult to find materials that are both strongly correlated and topological, but when you do find them and measure them it is also very difficult to connect what you’re measuring with a theoretical model that explains what’s going on.”

“At some point, you want to be able to say, ‘I want to make a material with particular behaviors and properties,” Yi said. “I think kagome is a good platform towards that direction, because there are ways to make direct predictions, based on the crystal structure, about the kind of band structure you will get and therefore about the phenomena that can arise based on that band structure. It has many of the right ingredients.”

Dai is the Sam and Helen Worden Professor of Physics and Astronomy. Dai and Yi are each members of the Rice Quantum Initiative and the Rice Center for Quantum Materials ( RCQM).