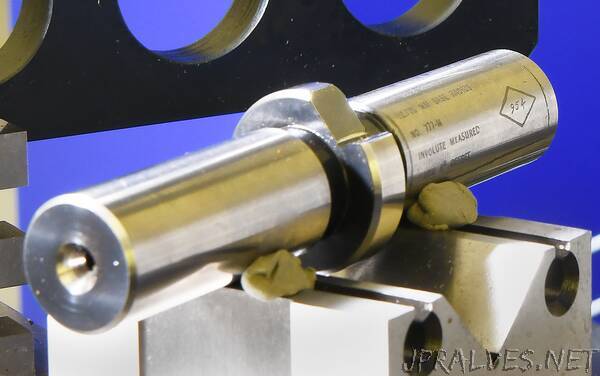 “After 30 years, NIST is once again calibrating gear artifacts, which could improve electric cars.

As mechanical objects, gears have been around for so long that people may take them for granted. But gears are sophisticated parts that play a vital role in cars, airplanes, construction and mining equipment, food processing, clock making and more.

And companies are still trying to make them better — specifically, quieter. As electric vehicles become more popular, the industry is pushing for gears that have tighter and tighter tolerances — in other words, smaller differences between the maximum and minimum sizes in a batch of gears that are considered acceptable for sale. Gears that fit together better make less noise, transfer power more efficiently and last longer.

“Those gear noises have always been there in gas cars, but electric cars are so quiet that now you can hear them over the engine,” said Dennis Everett, a mechanical engineer at the National Institute of Standards and Technology (NIST). “Consumers don’t like hearing those noises.”

Now, after a more than 30-year break, NIST is once again conducting ultra-accurate gear-related measurements for customers, starting with a major U.S. company that supports gear manufacturing.

As the nation’s laboratory for metrology (measurement science), NIST was performing these services for decades when requested by customers. In the 1980s, however, aging infrastructure made it impossible to maintain the necessary accuracy. A few years later, another government lab, Y-12, run by the Department of Energy, started to offer this service, with measurements traceable to NIST.

But then, a few years ago, Y-12 could no longer make these measurements with the necessary level of precision. The gear metrology industry found itself in a situation where if NIST couldn’t do the measurements, it would have had to go overseas to another government’s national metrology institute, which would have been expensive and time-consuming.

“It’s important that NIST maintain itself as a resource to be used by American gear manufacturers,” said Mark Cowan, senior systems engineer for Gleason Corp., the U.S. company that commissioned the NIST calibrations and which maintains an accredited gear calibration lab that itself services dozens of customers a year. Calibration labs need to maintain the lowest possible uncertainties on their measurements so that they can keep uncertainties acceptably low for their customers’ measurements – in this case, measurements of the equipment the gear industry uses to inspect its products. “There’s also an advantage to saying the measurements are NIST-traceable,” Cowan continued. “Companies like to hear something is NIST-traceable.”

So, in 2019, NIST’s Everett was tasked with rebuilding the old calibration capabilities. After a trial measurement of one specialized part, Everett and NIST’s Dan Sawyer finished measuring two more for the corporation this month with higher accuracies than before.

Among its other products, Gleason Corp. makes and uses a part called a gear artifact. Gear artifacts are metal objects of different sizes and shapes whose dimensions are known with high accuracy. The gear artifact is not itself a gear, but it has pieces that have the shape and size of a single gear tooth. These artifacts are used to calibrate equipment that measures gears and are necessary for precision manufacturing and quality control.

Gear artifacts themselves need to be calibrated to be useful. However, their calibration is a highly specialized task.

Gear teeth usually have a shape that follows what’s called an involute curve, which allows gears of different diameters to mesh together smoothly (see animations).

Gear artifacts also frequently feature an involute curve. This is a relatively complex shape compared to, say, a sphere or a block. It takes a lot of expertise and training, and precision measurement equipment, to make measurements of the involute curves on gear artifacts with sufficiently low uncertainties.

Everett had originally been involved with this kind of calibration in the 1990s, when he was a “rookie metrologist.” Since then, he has become an expert in making difficult artifact measurements, such as those for thread gauges, which are relied on for everything from the nuts and bolts you might buy at a hardware store to the threaded connections used in oil and gas drilling operations.

The machine NIST used to calibrate a gear artifact is called a coordinate measuring machine (CMM), which uses a touch probe to detect, and specialized software to determine, the distances between points on an object in three dimensions.

To set up the 2019 measurements, Everett was able to use a high-accuracy CMM that NIST had purchased in the 1990s, when it was used for a series of comparison measurements of gear artifacts between NIST and other institutions. However, the machine had since received a software update and new hardware, including a touch probe and a system for controlling the probe’s movement. So, although Everett started by looking through his notes from 25 years ago, he also had to spend time assessing the improved CMM’s performance.

With the CMM’s heightened capabilities came unknowns about how the system performed, and Everett couldn’t learn what else had changed without extensive testing. In addition, the gear artifact he was measuring was more complicated than the ones he had calibrated in the 1990s.

“It was probably a total of five months of me recreating what was done in the past and then applying it to a unique artifact we hadn’t seen before,” Everett said. “Then we were going back and forth with the customer to make sure we’re delivering what they want and expect, and that we’re doing it correctly.”

For the 2019 measurements it performed for Gleason Corp., NIST was able to offer the customer 1.5-micrometer (µm, millionth of a meter) uncertainties. In the new calibrations of two new Gleason artifacts completed this month, Everett was able to push that down to between 0.6 and 1.0 µm depending on the parameter.

One way Everett improved the measurements this time around was to use a technique called “measurement decomposition,” which involves introducing a series of simpler artifacts maintained by NIST to the calibration. By comparing those simpler objects to the sections of the gear artifact that they most resemble, the NIST researchers lowered the uncertainties further than would have been possible if they had measured the artifact alone.

Now that NIST has regained (and improved upon) its former capability, it’s possible the institute will get more requests for this special type of calibration.

“I believe there are some military facilities that, if they knew NIST could calibrate their gear artifacts, they would send their artifacts to them,” Cowan said.

“I wouldn’t be surprised if we get more inquiries once word gets out that we can do it,” Everett said.”