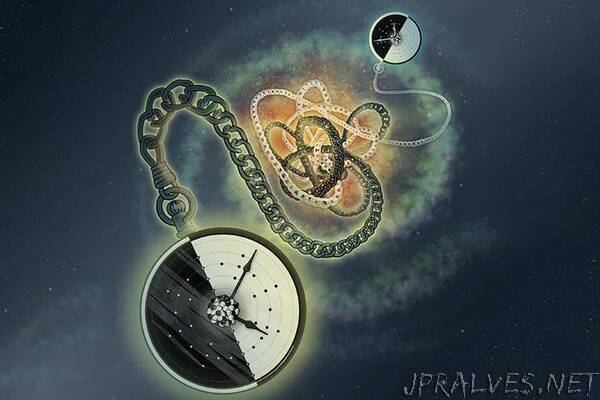 “For the first time, scientists at the University of Oxford have been able to demonstrate a network of two entangled optical atomic clocks and show how the entanglement between the remote clocks can be used to improve their measurement precision, according to research published this week by Nature.

Improving the precision of frequency comparisons between multiple atomic clocks offers the potential to unlock our understanding of all sorts of natural phenomena. It is essential, for example, in measuring the space-time variation of fundamental constants, for geodesy where the frequency of the atomic clocks is used to measure the heights of two locations, and even in the search for dark matter.

Fundamental limit of precision
Entanglement – a quantum phenomenon in which two or more particles become linked together so that they can no longer be described independently, even at vast distances – is the key to reaching the fundamental limit of precision that’s determined by quantum theory. While previous experiments have demonstrated that entanglement between clocks in the same system can be used to improve the quality of measurements, this is the first time researchers have been able to achieve this between clocks in two separate remotely entangled systems. This development paves the way for applications like those mentioned above, where comparing the frequencies of atoms in separate locations to the highest possible precision is vital.

Bethan Nichol, one of the authors of the paper published in Nature, said ‘Thanks to years of hard work from the whole team at Oxford, our network apparatus can produce entangled pairs of ions with high fidelity and high rate at the push of a button. Without this capability this demonstration would not have been possible.’

State-of-the-art quantum network
The Oxford team used a state-of-the-art quantum network to achieve their results. Developed by the UK’s Quantum Computing and Simulation (QCS) Hub, a consortium of 17 universities led by the University of Oxford, this network was designed for quantum computing and for communication rather than for quantum-enhanced metrology, but the researchers’ work demonstrates the versatility of such systems. The two clocks used for the experiment were only 2 metres apart, but in principle such networks can be scaled up to cover much larger distances.

‘While our result is very much a proof-of-principle, and the absolute precision we achieve is a few orders of magnitude below the state of the art, we hope that the techniques shown here might someday improve state-of the art systems,’ explains Dr Raghavendra Srinivas, another of the paper’s authors. ‘At some point, entanglement will be required as it provides a path to the ultimate precision allowed by quantum theory.’

Professor David Lucas, whose team at Oxford were responsible for the experiment, said, ‘Our experiment shows the importance of quantum networks for metrology, with applications to fundamental physics, as well as to the more well-known areas of quantum cryptography and quantum computing.’