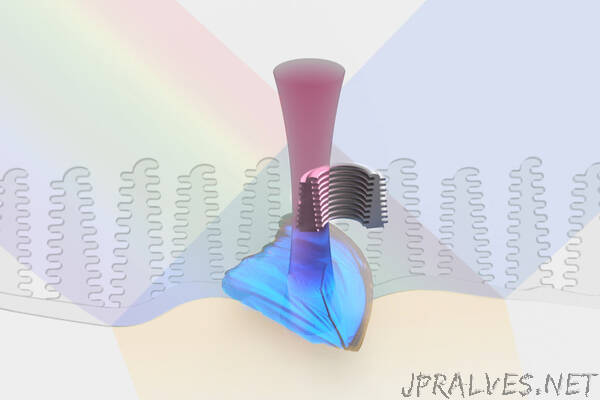 “Scientists can use laser radiation to print tiny structures with high precision. This approach enables them to mimic the superpowers of animals and plants and makes them accessible for engineering applications.

To survive in extreme habitats, many animals and plants have developed brilliant abilities that we otherwise only know from superheroes in movies. In most cases, their abilities are based on the extraordinary properties of their surfaces. Mimicking these properties offers enormous potential in the engineering field for developing new products and solving technical problems. Research teams from Bochum and Kiel have succeeded in mimicking the structural colour of the famous blue Morpho butterflies using a high-precision 3D printing technology referred to as two-photon polymerization (2PP). The researchers present their newest findings in a paper published in the Journal of Optical Microsystems on 2 September 2022.

3D printing of biologically inspired Christmas trees
2PP is a laser-based printing technology that allows the processing of photosensitive resins in all three dimensions. Unlike conventional printing techniques, it is, thus, possible to create complex and true 3D structures using virtual computer models without the need for support structures. In addition, 2PP enables high-resolution since single structural features can measure a size down to 100 nanometres. This number corresponds roughly to one-thousandth of the thickness of human hair.

The 3D printing capabilities of 2PP enabled the researchers to produce hierarchically composed structures at the micro- and nanometre scale. In this way, they were able to mimic the structural colour of the blue Morpho butterflies, including their extraordinary optical properties. The colour of the butterflies is formed by tiny Christmas tree-like structures on their upper wing surface. Moreover, complex physical phenomena between light and the Christmas trees make it possible to observe the blue colour as almost angle-insensitive. “This is very surprising because normally structural colour appears iridescent like a rainbow when it is generated by similar physical phenomena, such as refraction, for example,” says RUB researcher Gordon Zyla.

Biologically inspired structural colours for anti-counterfeiting applications
In their current work, published in the Journal of Optical Microsystems, the researchers present a successful redesign of their butterfly-inspired structures from previous publications. The redesigns enabled them to observe the resulting angle-insensitive blue colour uniformly or only from specific directions. For this purpose, they first analysed the optical properties and morphology of the wing surface of a Morpho didius butterfly at CAU. Based on their findings, they derived that they can control the direction in which the angle-insensitive colour appears by changing the geometry of their hierarchically composed structures only on the microscale while still mimicking the butterfly’s structures on the nanoscale.

The novel designs proposed by the authors are suitable, for example, for manufacturing highly complex anti-counterfeiting features. Overall, their research demonstrates the great potential of the 2PP technology for its use in biomimetics. In this context, the authors assume that a wide variety of functional structures from nature could be mimicked using 2PP in combination with novel photosensitive materials. Thus, other superpowers found in organisms could also be made accessible for different engineering applications. These are, for example, improved adhesion and wear resistance to various surfaces, superhydrophobicity, commonly referred to as the lotus effect, or other colorations used in nature as warning signals, camouflage, or intrasexual communication.”