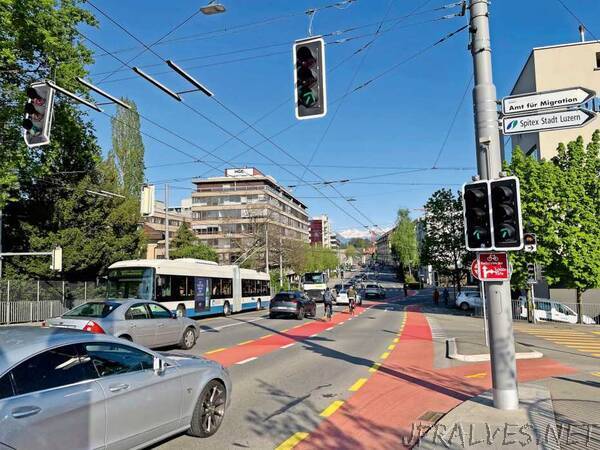 “Traffic jams and long waiting times at junctions in city centres are part of our everyday lives - be it as pedestrians, public transport users or motorists. ETH spin-​off Lumisera promises a significantly improved traffic flow with self-​regulated traffic light systems.

Every major city is familiar with the problem: junctions where traffic jams and delays occur time and again. Engineers and authorities develop signal plans for the control of complex traffic light systems for every time of day and traffic volume. The aim is to find the best possible variant for all road users at any time of day. If required, green phases can be used to prioritise buses or pedestrians. This type of traffic signal control has been standard for the past 20-​30 years.

Christian Heimgartner (CEO) and Stefan Lämmer (CTO) of Lumisera have taken the next step by planning the traffic flow second by second with their self-​regulated traffic light systems. This means that the circuits are not programmed in advance but are continuously adapted to the traffic volume. This allows the auto-​control to react quickly and flexibly to traffic situations.

The goal is still the same as before: road users should have few stops and waiting times, and traffic jams should be minimised. Of all the possibilities, the patented optimisation procedure selects the combination that achieves minimum stops and waiting times in the best possible way. The system allows prioritisation of different road users - and this completely independent of the time of day, as the traffic volume is continuously analysed. Even if unforeseeable traffic situations occur (e.g., diversions), the control system adjusts automatically.

For the continuous analysis of the traffic volume and optimisation of the steering commands, a technology is used that was originally developed and patented at the TU Dresden and the Chair of Computational Social Science with the participation of Professor Dirk Helbing. Pedestrians wanting to cross the road are detected by pressing the button at the traffic lights, as they have done until now. Buses automatically send information to the control system, and for the rest of the traffic there are cameras and/or induction loops in the asphalt. The transmitted data provide a dynamic image of the traffic volume, based on which the software controls the traffic lights.

The continuous data acquisition and the optimisation algorithm require more computing capacity than conventional traffic light systems. This is provided by an external processor that can be operated separately from the system in the control centre or on site. This means that software updates and extensions are possible at any time, independent of the life cycle of the traffic lights.

The city of Lucerne tested the system on a stretch of road with two junctions. Some 18,000 vehicles and around 700 buses travel there every day. As there are numerous workplaces in the area, there is also a considerable amount of pedestrian and bicycle traffic. Waiting times and traffic jams were common during peak hours.

A scientific analysis of the test phase in January 2020, carried out by the Institute for Transport Planning and Systems (IVT) at ETH Zurich, delivered encouraging results. The researchers compared the new and the original traffic light system. For all road users, the average waiting time at both junctions was reduced - depending on the time of day, the savings are even considerable.

The self-​regulated system has proven to be excellent and has meanwhile replaced the old control system. Further installations are being planned.

Apart from the improved traffic flow, self-​regulated traffic light systems have other advantages. For example, the time-​consuming pre-​configuration of different signal plans for different times of day is no longer necessary. Initial observations also indicate that safety for pedestrians is increased, as they are less likely to cross the road at red lights. The system would be really interesting in the context of interconnected or autonomous driving, where vehicles constantly send signals that could be received by the system even without induction loops.

However, that is still a vision for the future. For the time being, Heimgartner and Lämmer are concentrating on the further spread of self-​regulated systems. Two projects are currently underway in Switzerland and three in Germany. They also specialise in traffic assessments for public authorities, for which they can draw on many years of experience in the industry.”