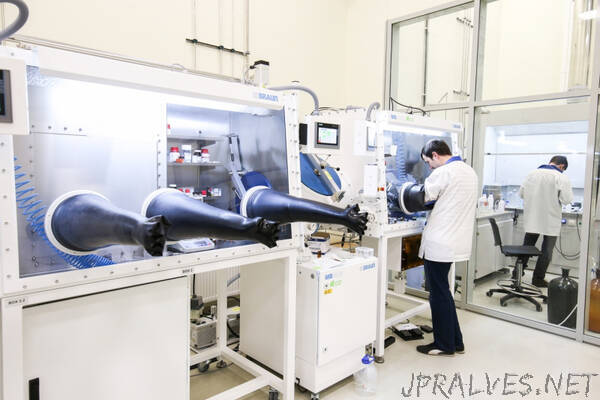 “What kind of high-tech materials for the electronics, power, and textile industries are being made in Russia? Which projects are developed in St. Petersburg and what is their potential? These and other questions were discussed at a recent TASS news agency’s press conference that featured heads of strategic projects and experts from St. Petersburg universities.

Flexible electronics
The past decade saw active development in the field of flexible electronics. Major companies are already working on bendable smartphones or TVs that can be rolled up like paper without losing their properties. For example, in 2021 the Chinese company OPPO presented the rollable concept smartphone . In Russia, scientists have also been working in this sphere – for instance, five years ago ITMO launched the Flexible Electronics and Thin-Film Photovoltaics Laboratory (FlexLab).

According to Viktoria Zheltova, the lab’s researchers are studying and developing flexible electronics and photovoltaic materials, as well as testing these technologies and assembling functioning prototypes for future devices. For instance, the scientists are developing measurement and application methods for photodetector materials, display inks, and sensor films for temperature monitoring, as well as working on these materials’ composition.

Recently, the lab has focused its research on image sensors that can be applied in dactyloscopy and X-ray detectors, among other things. X-ray detectors in particular have a wide range of potential uses – X-ray inspection is conducted in many industries, such as aviation, engine- and shipbuilding, nuclear energetics, pipe and tube production, as well as in the construction and use of pipelines.

Apart from that, the lab’s researchers are working on LEDs and color converters for screens. ITMO’s own technologies for next-gen perovskite quantum dots are already employed at the lab. Viktoria Zheltova states that such materials are brighter and more efficient, which makes them a promising compound in the creation of various displays.

Materials science and new memory types
Materials science is one of the fields that is greatly developed in the country. For instance, according to Viktor Luchinin, Russia excels over its international counterparts in the field of synthetic diamond production.

Another potential source of benefit is the silicon carbide (SiC) technology, which has been in the works at LETI University for over 50 years. This technology holds a lot of potential. For instance, silicon carbide-based diodes have already entered the rapidly developing market of inverters for solar cell-powered systems.

Roman Burkovsky says that Peter the Great St. Petersburg Polytechnic University, famous for its expertise in metallurgy, is now actively engaged in nanotechnologies. As an example, he cites a project focused on the new types of ferroelectric random-access memory (FRAM), which is similar to dynamic random-access memory (DRAM) in its structure. However, in order to ensure the device’s energy independence, a layer of ferroelectric is used in FRAM instead of the dielectric layer commonly applied in DRAM.

Smart textile
Fashion Tech is not just about the latest fashion trends. Today, the textile industry is a complex of technologies that, among other things, develops new functional materials. According to Olga Moskalyuk, researchers at St. Petersburg State University of Industrial Technologies and Design are already working on electroconductive textiles that can be applied as isolators, antistatic products (such as personal protective equipment or packaging), or electromagnetic protection devices.

The university is also conducting research in coloration, synthesis of new decorative substances, and innovative textile decoration. According to Elena Sashina, the university’s scientists have already developed a solution based on nanoparticles of metal oxides and a solidifying technology. The technology makes fabrics sensitive to light (photochromic) and capable of cleaning themselves when subjected to sunlight. Such fabrics can be used in interior design.

Researchers at the university are also working on materials with durable antibacterial and antifungal finishes. Elena Sashina demonstrated a face mask made from such a material, stating that it retains its properties even after several washes.

Import substitution: challenges and solutions
Not only the market, but the researchers as well will have to adapt to the changing conditions. According to Roman Burkovsky, he and his colleagues wouldn’t want to sacrifice long-term international collaborations, but they are looking for opportunities to collaborate with other Russian research groups as well – for instance, in the recently revived field of crystal growing.

Olga Moskalyuk believes that substituting raw materials might be the biggest challenge for the textile industry. The country has factories that produce some fiber-forming polymer materials, but until recently they have mainly been produced from imported components. That’s why the field of low-tonnage chemistry deserves special attention from the government; it can be a source of pigments, catalysts, raw materials for special fibers, engineering plastics, and individual chemical agents.

Viktor Luchinin also pointed out the need to establish systemic connections between corporations as a crucial step in developing truly science-intense production processes. For now, experts say, all such actors act mostly independently.”