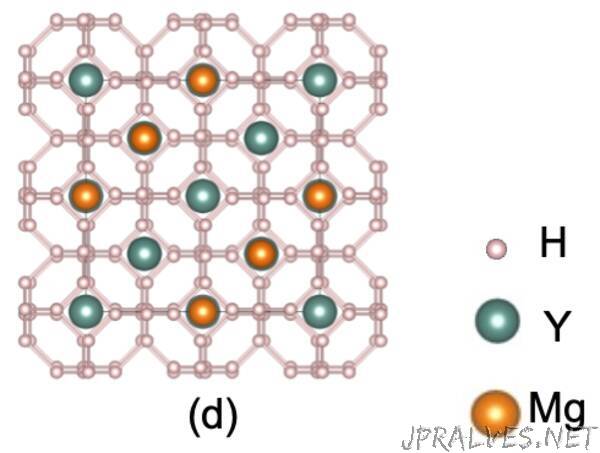 “Superconductivity is a phenomenon where a material loses its electrical resistance. However, it occurs at extremely low transition temperatures requiring expensive cooling solutions. A breakthrough in high-temperature superconductors was found in crystal structures containing hydrogen. Now, researchers have used a supercomputer to predict new candidates among such hydrogen-containing crystalline materials. Their simulations reveal certain structures to display superconductivity getting closer to room temperature.

High-temperature superconductivity allows the development of energy-efficient devices without the need for expensive cooling solutions. In this regard, ternary hydrides, which are compounds formed by two elements and hydrogen have displayed superconductivity at room temperatures, although at extremely high pressures. However, finding the right set of elements that result in a superconducting ternary hydride can be a daunting task due to the sheer number of possible combinations with metals and non-metals.

Among ternary metal hydrides, low atomic number elements attached to binary yttrium hydride systems (YHx) have been observed to be stable compounds with high transition temperatures. Magnesium in particular, when attached to hydrogen as a binary hydride (MgH6) has displayed room temperature superconductivity. The favorable transition temperature and stability at high pressures encouraged the researchers to focus their search on Y-Mg-H systems.

Apart from having a high transition temperature, a viable candidate has to be stable at the high pressures where superconductivity is observed. Using this parameter in their search, the researchers examined possible crystal structures for YMgHx compounds where (x= 2-10, 12,14, 16). Starting from random structures, they analyzed various configurations for each hydrogen composition (x value) until they found the most stable structures at high pressures of 100, 200 and 300 GPa.

With the aid of computer simulations, researchers are beginning to understand the factors that lead to superconductivity. It is only a matter of time before we experience the energy revolution brought about by this much sought-after phenomenon.”