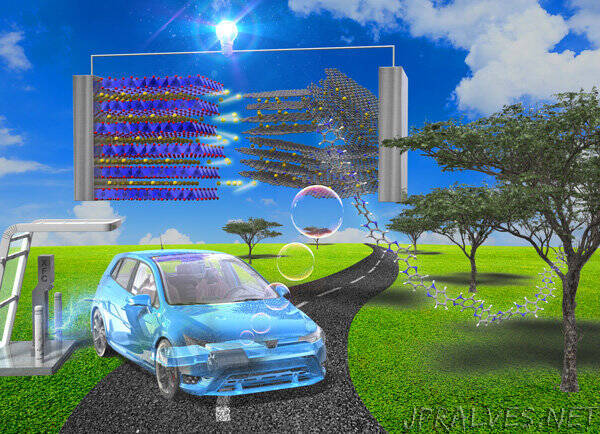 “The proposed stable anode material, made with a bio-based polymers, could unlock extremely fast battery charging for electric vehicles

To overcome the slow charging times of conventional lithium-ion batteries, scientists from Japan Advanced Institute of Science and Technology have developed a new anode material that allows for ultrafast charging. Produced via a simple, environmentally sound and efficient approach involving the calcination of a bio-based polymer, this novel material also retained most of its initial capacity over thousands of cycles. The findings of this study will pave the way to fast-charging and durable batteries for electric vehicles.

With the climate change concerns, an ever-increasing number of researchers are currently focusing on improving electric vehicles (EVs) to make them a more attractive alternative to conventional gas cars. The battery improvement of EVs is a key issue to attract more drives. In addition to safety, autonomy, and durability, most people want quickness in charging. Currently, it takes 40-minute with state-of-the-art EVs while gas cars can be ‘recharged’ in no longer than five minutes. The charging time needs to be below 15 minutes to be a viable option.

Unsurprisingly, lithium-ion batteries (LIBs), which are used everywhere with portable electronic devices, have been recognized as an option in the field of EVs, and new strategies are always being sought to improve their performance. One way to shorten the charging time of LIBs is to increase the diffusion rate of lithium ions, which in turn can be done by increasing the interlayer distance in the carbon-based materials used in the battery’s anode. While this has been achieved with some success by introducing nitrogen impurities (technically referred to as ‘nitrogen doping’), there is no method easily available to control interlayer distance or to concentrate the doping element.

Their strategy constitutes a relatively simple, environmentally sound, and highly efficient way to produce a carbon-based anode with very high nitrogen content. The precursor material for the anode is poly (benzimidazole), a bio-based polymer that can be synthesized from raw materials of biological origin. By calcinating this thermally stable material at 800 °C, the team managed to prepare a carbon anode with a record-setting nitrogen content of 17% in weight. They verified the successful synthesis of this material, and studied its composition and structural properties using a variety of techniques, including scanning electron tunneling microscopy, Raman spectroscopy, and X-ray photoelectron spectroscopy.

To test the performance of their anode and compare it with the more common graphite, the researchers built half-cells and full-cells, and conducted charge-discharge experiments. The results were very promising, as the proposed anode material proved suitable for fast charging, thanks to its enhanced lithium-ion kinetics. Moreover, durability tests showed that the batteries with the proposed anode material retained about 90% of its initial capacity even after 3,000 charge-discharge cycles at high rates, which is considerably more than the capacity retained by graphite-based cells.

Excited about the results, Professor Matsumi comments, “The extremely fast charging rate with the anode material we prepared could make it suitable for use in EVs. Much shorter charging times will hopefully attract consumers to choose EVs rather than gasoline-based vehicles, ultimately leading to cleaner environments in every major city across the world.”

Another notable advantage of the proposed anode material is the use of a bio-based polymer in its synthesis. As a low-carbon technology, the material naturally leads to a synergistic effect that reduces CO2 emissions further. Additionally, as Professor Matsumi remarks, “The use of our approach will advance the study of structure-property relationships in anode materials with rapid charge-discharge capabilities.”

Modifications to the structure of the polymer precursor could lead to even better performance, which might be relevant for the batteries not only of EVs, but also of portable electronics. Finally, the development of highly durable batteries will decrease the global consumption of rare metals, which are non-renewable resources.

Let us all hope future progress in this field will pave the way to the widespread adoption of electric cars and other ecofriendly technologies.”