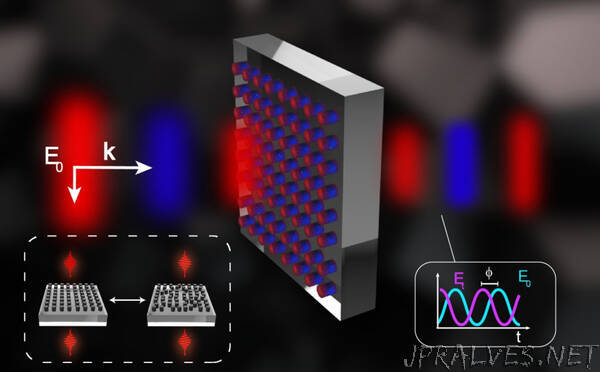 “Global trends are leaning towards miniaturization, minimalism, and portability – and that’s the case for research, too. These days, metasurfaces are gaining popularity as platforms for super-thin devices equal, or sometimes superior to, their “normal-sized” counterparts. This is achieved thanks to “invisible” particles in anapole modes. Recently, these particles have nanophotonics, but researchers from ITMO, Moscow, and Riga went even further and developed hybrid anapole modes. Their new model is more efficient than its predecessors and opens new applications for metasurfaces in optics.

So meta
Just like some substances are made up of atoms, metasurfaces consist of metaatoms. Their size, shape, and properties can be controlled in order to change the properties of the material.

Contemporary technologies make it possible to create good-quality objects of a given shape in nanoscale. By working with the material’s structural units at this level, researchers can build metasurfaces as thin as only a single layer of metaatoms. At the same time, the resulting device based on this metasurface equals or even outperforms its regular counterparts in functionality.

What are anapoles and why are they “invisible”?
In a 2015 Nature Communications , researchers described the creation of dielectric nanoparticles in anapole modes that were completely transparent to electromagnetic radiation in the visible range. These are nonradiating particles that are capable of diffusing almost no light at a specific wavelength. This results in radiation “passing” through the anapole – under certain conditions, the anapole turns invisible.

In order to identify such anapole modes in nanoparticles, researchers model the object and then gradually change its geometry, refraction index (the material it’s made of), and the length of the electromagnetic wave it is subjected to. By changing these parameters, physicists end up with a unique configuration – for instance, a hybrid anapole.

What makes the hybrid and why it’s important
In anapole modes, particles have different minimum diffusion coefficients for each multipole – and for some of them, these coefficients can be absent. In the new study, a team of researchers from ITMO’s Faculty of Physics, the Institute of Nanotechnology of Microelectronics of the Russian Academy of Sciences, and Riga Technical University have modeled nanodiffusers in a hybrid anapole mode in which minimum diffusion coefficients are concentrated in one wavelength. Then, the scientists assembled such hybrid anapoles into a metasurface that demonstrated another unique property: its metaatoms have almost no interaction with each other or with the substrate that they are applied onto.

Thanks to its unique geometry, the hybrid anapole is almost invisible to incident radiation in a specific electromagnetic range.

“It’s easier to produce metasurfaces that consist of identical atoms spaced evenly from each other. But currently there is a huge potential in materials with metaatoms of different shapes and sizes that are disoriented with regards to each other on the substrate. In this sense, our particles can play a significant role because we can move them around all we want – they won’t interact with any of their neighbors. The unique properties of existing metasurfaces are based on the connections of their structural units. Conversely, we suggest fine-tuning effects on each metaatom to get their accumulated effect on the scale of the material as a whole,” says Alexey Kuznetsov, a co-author of the article and a PhD student at ITMO’s Faculty of Physics.

Applications and future endeavors
In the article, the scientists demonstrate that insignificant changes in anapole particle characteristics (such as the radius of the cylinder) lead to slight changes in the phase of the passing wave while the material remains transparent. This property makes it possible to use such metasurfaces in phase inverters.

Today, it’s cheaper to make a lens from glass than to work with individual nanoscale metaatoms and turn them into metasurfaces. The main challenge is the cost of the technologies involved. At the same time, such production requires quite a lot of computing to account for a multitude of different factors – and that also doesn’t make it accessible. That’s why researchers are currently engaged in mainly theoretical studies.

“Metamaterials are widely used in radio physics and the industry aims to actively implement them in photonics, too. I think that our project will continue with an analysis of practical applications of hybrid anapoles,” concludes Alexey Kuznetsov.

At the moment, the team is looking for partners to implement their model in practice and prove the hypotheses posited by the calculations of the current study.